The Splatoon 2 Global Testfire event was this previous weekend and now the technical analysis by Digital Foundry is out.

The big takeaway from this is the resolution matches its Wii U predecessor at 720p while being docked and has a dynamic resolution while handheld which will drop it below 720p. This is disappointing to see it not exceed the previous console but the game still looks nice with its art style.

The game runs great and doesn’t seem to have many frame rate drops. Splatoon 2 targets 60 frames per second and reaches that goal docked and undocked. The Wii U version also ran at 60 FPS but only 30 FPS in the hub when you start the game. The testfire event didn’t give players an option to be in a hub so it’s unclear if that will happen on the Switch too. Many gamers will prefer 60 FPS but a higher resolution was expected since the Switch is the newer console. Splatoon 2 looks like much of the same game, for better or worse.

I can say that fans of the first game will find a lot to like with the sequel. However, for those who didn’t enjoy the original, it’s hard to find something worth recommending to you with the sequel. 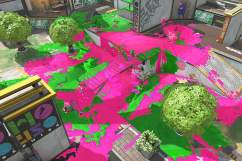