Update – November 15: Kotaku said that Sean doesn’t actually work for EA. EA themselves told the publication that they weren’t able to confirm that Sean works for the company.

A Twitter user who goes by the name Sean and claims to be a developer for EA tweeted that he has received death threats Monday morning presumably because of Star Wars Battlefront II’s loot box mechanics.

Other game industry people have been showing support for Sean and calling out those who issue death threats.

I can’t and won’t ever condone “passion” in the form of hatred and threats. Hard line stance there. That’s not passion, that’s hate. If you can’t be civil enough to outline your frustrations instead of taking them out on members of the dev team, I don’t want your feedback anyway.

These guys need to be respected not abused/threatened. These are the people that create the games we love so much. Death threats are NOT ok. Ever. Nope. Never. Don't do it. #respecteveryone https://t.co/QZ9pXZeB42

No matter how you feel about a feature in a game, this is never okay. https://t.co/89J3wMuT2O

Adding to others reminding that death threats are NEVER, EVER justified. I don't care how much you dislike a game or company, this is never alright. Hope you're ok Sean. https://t.co/i1e61kdLa2

"Why aren't devs more open about their process?"

This is why developers usually can't be transparent with the community. Next time you think that devs are being too closed off, remember this. Would you be open and honest if you were going to be attacked/threatened at every turn? https://t.co/QjWwxoQsFs

Videogames are pieces of plastic and digital code. Regardless of opinion don't be a dick by attacking devs. https://t.co/wZlzSeIr6D

Sean has expressed his gratitude over the supportive tweets and has even responded to and retweeted a number of them.

Had about 5 of those today.

This was after he tweeted “The arm chair developers on this internet.” Many interpreted the tweet as a dismissal of concerns over the game’s loot box mechanics. Everett has since then deleted the tweet and claimed that it had nothing to do with community remarks or topics within or around the game.

Taking tweets out of context, and fun Sunday conversations. I did Twitter wrong today. I am logging off.

My tweets earlier had nothing to do with community remarks or topics within or around SWBFII. I made a tweet about a general thing and people claim I am speaking about my games community complaints. #disheartning #Frustrated Sorry to those who think it was about Star Wars.

I removed those tweets as hordes of angry gamers being told I was speaking about them were upset. I get that, but someone misinterpreted my tweet, I again apologize for that, but it was not my intent. Trust me I am at bat for this community and game/franchise I love.

As Game Critic Jim Sterling points out, most developers don’t actually deciding to include loot boxes in the game. That’s usually the decision of publishers or shareholders.

Try to remember most individuals actually making games aren't the ones deciding where loot boxes go. It's on publishers and shareholders, faceless executive dhampirs who don't give a fuck about games.

This is all in the wake of people expressing their distaste over Battlefront II’s loot box mechanics over the weekend. Reddit user TheHotterPotato played the Galactic Assault mode during the EA Access period, did the math, and found out that it would take about 40 hours to get the 60,000 credits needed to unlock Luke Skywalker or Darth Vader. It also takes 13.79 hours working at minimum wage ($7.25) to get enough money to buy 60 Trooper Crates. Otherwise you can spend 157.54 ( or 6.56 days) playing the game to get enough credits to buy 60 Trooper Crates. He also found that it is currently 11.4 times more efficient with your time to spend money in the game for loot boxes rather than play it.

EA’s Community Team responded to the backlash over the game’s loot boxes with this response:

The intent is to provide players with a sense of pride and accomplishment for unlocking different heroes.

As for cost, we selected initial values based upon data from the Open Beta and other adjustments made to milestone rewards before launch. Among other things, we’re looking at average per-player credit earn rates on a daily basis, and we’ll be making constant adjustments to ensure that players have challenges that are compelling, rewarding, and of course attainable via gameplay.

We appreciate the candid feedback, and the passion the community has put forth around the current topics here on Reddit, our forums and across numerous social media outlets.

Our team will continue to make changes and monitor community feedback and update everyone as soon and as often as we can.

The response has seen a massive -383,000 points at the time of writing. Users were more than willing to provide “candid feedback.”

“Hutt contracts and their rewards were a sense of pride and accomplishment,” writes user Yuanrang, referencing features from the first Battlefront. “Various account level races and trooper skins were a sense of accomplishment. Locking iconic characters behind credit walls that will take dozens of hours to get one is just insane, especially when I am willing to bet you have tons of heroes planned which will be behind similar paywalls? You cannot ever attain a sense of pride and accomplishment from that, because most sane people will give up long before this.”

Connerjameswilson added that we could already play as Darth Vader and other characters in the first game.

“This means nothing without context,” said mtarascio, referencing the community team’s response that they “selected initial values based upon data from the Open Beta and other adjustments made to milestone rewards before launch.” “Everyone is accusing you of receiving the data and then tailoring the grind to encourage people buying characters in an already full priced game,” they said.

“10 years ago I could put in a cheat code to unlock them if I didn’t care about a sense of ‘achievement,'” said ca990. “Now I need to put in my credit card number. Go fuck yourself.”

“Thanks for confirming my refund,” said Mariozilla.

In Moruitelda’s lengthy post, they said that they recognizes that the team likely has no say in the decisions of the company and are merely there to represent the company but tore into the game’s business practices none the less.

I recognize that you are a front-line level employee in a multi-billion dollar entertainment conglomerate, and that you likely have no say in the message you’re giving. Likely, your manager and your manager’s manager don’t have the right to call into question the strategic business decisions that get made by the highest levels of the company.
So please understand that when I say this, I am not saying it to you. I feel for you, because you have a lonely, thankless job, trying to do your best to rehabilitate the public face of an incredibly hated company. I don’t resent you at all, I don’t resent your manager, and I respect the person behind the keyboard.

But fuck EA. I don’t buy your games anymore. I am beyond insulted by the microtransaction/season pass/greedy-lazy business model that your company has perfected over the past decade or so. It’s disgusting. It’s a perversion of gaming. The suits that control your company aren’t interested in anything but pushing out shitty incremental upgrades to keep us wasting money on shit, and on getting a small percentage of addicts to bankrupt themselves $5 at a time.

It’s fucking deviant. It’s absolutely irresponsible. It’s disgusting. Fuck you guys. I am not buying another EA game again until the upper levels of business management at EA are fucking stripped down and replaced by people who aim to make fair profits by producing great content again. EA used to do that, but it’s been years, and I’m done pretending. Every new game that I’ve bought for the past year, I’ve checked to make sure that EA was not involved before paying. I plan to continue that until serious changes are made.

You can’t fix this. I know your bosses want you to, but you can’t. Because somewhere, there’s a CEO, or President of Game Design, or a fucking board of directors who have decided to produce shitty games loaded with dopamine drops to leech money rather than earn it. That person has ruined your company’s goodwill.

In Heavy’s impressions article on Battlefront II’s beta, the reporter criticized the loot box system saying that if you really want a skin or a certain passive ability-granting card, you need to sift through tons of useless items. “It’s essentially gambling where you put in money hoping to get something substantial while you risk getting something useless,” said the reporter. “This sort of psychological pummeling is expected in a free-to-play game, which is why it’s so unwelcome in a premium-priced game.”

But it goes beyond even that. During the beta, many players found that the game had what IGN calls “pay-to-win elements” as many of the passive abilities granted from Star Cards in the loot boxes gave significant bonuses to paying players such as healing after kills, lower cooldown times for abilities, and Boba Fett becoming invincible if firing rockets from midair. EA has responded by toning the system down a bit as Heavy reported such as taking certain weapons out of loot boxes and instead having them be unlockable by playing the weapon’s specific class, having to be at a certain level to equip and upgrade higher level Star Cards, and removing Epic Star Cards from Crates. However the progression system still seems to be tightly tied to the loot box system.

Update: EA is reducing the amount of credits needed to unlock top heroes by 75 percent. Luke Skywalker and Darth Vader will now be available for 15,000 credits; Emperor Palpatine, Chewbacca, and Leia Organa for 10,000 credits; and Iden at 5,000 credits. 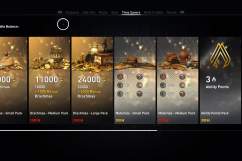