Dead by Daylight is still churning out new content despite having a release date in mid-2016.

The popular killer versus survivor gameplay doesn’t seem to be slowing down any time soon and it looks like the team behind Dead by Daylight has just teased a brand new killer.

In a short video, you hear the sound of a clock ticking before seeing “Let’s play a game” flash across the screen. This 21 second video doesn’t name Jigsaw definitively but it does leave enough clues for us to determine that is who is being talked about. The trailer didn’t require a lot of analysis to come to this conclusion. There’s no indication of how this would work in game since it would be weird to see a puppet as a killer. It’s possible we could see a random pig head killer but that remains to be seen.

No timetable has been given for the release of a new killer or who, if any, will be the new survivor coming with Jigsaw.

While Dead by Daylight has added some original DLC of its own, a good chunk of the DLC is made up of licensed characters. Since its release, notable slashers such as Freddy Kreuger, Michael Myers and Leatherface have joined the action. With Jigsaw presumably on the way, we can bump up the number of licensed characters to four.

With these characters, it hard to imagine any more licensed characters joining the action. Perhaps Ghostface from the Scream series could make an appearance in the future.

Jason Voorhees could have made a good addition to the roster of killers but instead he went on to star in his own video game called Friday the 13th: The Game. That game borrows a lot of elements from Dead by Daylight but does enough to separate itself and feel like a brand new game altogether.

If we had to play the guessing game on when Jigsaw would be released, we’d still saw he is at least a month out. The ranks just reset in Dead by Daylight so it doesn’t seem like a good time to release a new killer. If we were the developers, and we’re not, we’d release Jigsaw near the start of the next season to give every player equal footing to start out on.

Dead by Daylight is an asymmetrical multiplayer experience that pits one killer against four survivors as the survivors try to fix a series of generators to power up the exit gates and escape the killer. The killer is tasked with stopping this and putting the survivors on hooks scattered across the map in order to sacrifice them to the entity.

Survivors have the advantage of seeing in third-person meaning they can peak around walls and see the killer from a distance without actually looking at him or her. The killer sees things from a first-person perspective which means survivors could escape his grasp if they are stealthy enough. Of course, the killers have a variety of perks that can make the survivors’ lives a living hell.

Dead by Daylight is available now on Xbox One, PS4 and Steam for PC. For more gaming news, guides and features make sure you stay with us here at Heavy. 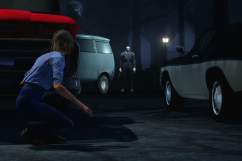 Read More
PC Games, PS4, Xbox One
Do you want to play a game?