The more you work at something, the better the results. Striving towards a better you can apply to anything and everything, especially in the hard-knock world of MMA. Professional fighters strive to make it to the UFC and reach the heights of popularity of legends such as Anderson Silva, Randy Couture, Tito Ortiz, and many of today’s current greats. To get to that level means constantly improving and focusing on the areas that need the most work. EA Canada stands by that mantra and it’s visible in their work on the EA Sports UFC franchise. The last entry took the necessary steps towards creating the best MMA game on the market, but it didn’t quite get to the promised land. That’s the case for the third installment of the series, a fighter that’s starting to ascend the ladder but still encountering debilitating bumps along the way.

One area that’s seen a huge improvement is the stand-up game. Landing quick jabs, overhead punches, leg kicks, and other assorted maneuvers not only look better, they feel more fluid. The last game had its issues in that area, as strike animations didn’t look as natural as they should be. Plus certain fighters didn’t retain their signature approaches to kicks and punches. UFC 3 does things much better in both areas thanks to the more realistic transitions that occur between strikes and movement throughout the Octagon.

Throwing a quick punch while your fighter’s in motion no longer looks as odd as it did before. While it takes a while to wrap your head around all the different ways you can land those strikes, it becomes second nature after a while. The more extensive in-game tutorials focus on all areas of MMA, so there’s plenty of time to better yourself in the digital cage. The clinch, ground and submission mechanics feel as equally improved as the game’s striking game thanks to a more defined display of what you’re doing and hoping to do next. This sequel does a better job of making you feel confident and knowledgeable about everything occurring within a fight.

The biggest problem most fans had with the last entry was the lackluster Career Mode. UFC 3 takes great strides towards providing players with the best representation of an MMA rookie’s rise to Hall of Fame status. Gone are the training minigames from the last game. Now you can simulate those moments while having the opportunity to do some sparring matches with a fighter who’s similar to your next opponent.

The overall presentation has seen some improvements as well – tweets from fans, mandatory promotional events, career milestones, incorporating scenes from Dana White’s Looking for a Fight, The Ultimate Fighter, and the UFC Minute starring Megan Olivi all make the GOAT Career Mode shine. If there’s one thing missing though, it’s the lack of a more meaningful build-up with your rival. Simple back and forth tweeting doesn’t truly exhibit the passionate hate you see on TV during an actual UFC feud. Hopefully, the next entry gets that aspect of the sport right.

Another mode that’s gotten a bit better is the Ultimate Team Mode. Amassing a championship roster of fighters through card collecting remains as addictive as ever, but upgrading those fighters offers better customization options. Each fighter comes with more slots to fill, which goes towards collecting new moves and ability buffs.

The constant loop of unlocking a new combatant, improving their moveset/stats, taking on offline/online challenges, buying new card packs, and doing it all over again is quite addictive. The presence of microtransactions is still a problematic part of EA’s titles, no doubt. But UFC 3 tends to dish out rewards at a faster pace, so players who don’t want to spend real-world money in this entry can do just that. Ultimate Team isn’t hugely impacted by the presence of microtransactions, which means it can be enjoyed either by buying them or ignoring them altogether.

UFC 3 may compete at a more competitive level, but it’s still weak in a few areas. A few odd movement animations cropped up from time to time. Going for a spinning back punch in the vicinity of the Octagon led to some moments where arms looked out of place. And there are moments where a landed strike elicits a reaction that doesn’t reflect what it looked like onscreen (that’s my main knock on the game’s collision-detection component).

The main commentary duo of Joe Rogan and Jon Anik isn’t terrible by any means, but they sometimes lack the factual information about maneuvers being delivered in the Octagon or the career path of a created fighter. Even when your GOAT Career Mode fighter is in the middle of a title fight, Rogan and Anik will ramble on about your pro’s bright future (even though he/she is already fulfilled their future potential). It’s crazy to hear how much better Snoop Dogg is at delivering a more entertaining call of the action over actual MMA experts.

EA Sports UFC 3 continues the upsurge in quality of its franchise. The stand-up game flows so much better than it once did, plus maneuvering on the ground and looking for a submission feels just as improved. The GOAT Career Mode and Ultimate Team Mode has gotten plenty of additional perks that push it towards near perfection.

There are still a few kinks to work out, such as the odd fighter animations, collision-detection errors, and somewhat off commentary. It’s clear that EA Canada is getting better at presenting a quality MMA simulator with this entry’s boost in quality. UFC 3 is proof that a championship run for the franchise is attainable. 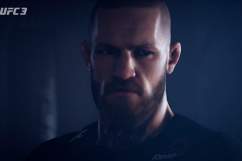