The new year is here and with will surely come another slew of games to play in 2018. With the year being so new, we don’t have a huge list to look through so we’re going to touch on games that have stood the test of time and will give players hours of fun even in 2018.

This is just a handful of games that are being spotlighted but there are many more games out there if you look hard enough.

Here are 7 fun Roblox games that are worth your time in 2018. We’ll add to the list over time as more games pop up that catch our eye.

We’ve previously highlighted this game in a list last year but the recommendation still stands in 2018. Jailbreak allows players to choose between being a prisoner or a police officer. If you’re a prisoner you have to escape from jail in the beginning and then grab a change of clothes and start robbing some stores. The cops have to make sure law and order is maintained and are tasked with sending the criminals back to prison.

Getting into this game with a group of friends can result in hours of fun as you race down the road or try to figure out elaborate plans to escape from prison. This game can almost be described as a lighter version of Grand Theft Auto since you can rob stores and drive around the open world.

There’s a lot to find in this game so be prepared to have your life put on hold for a long time while you’re playing this game.

In a plot twist nobody could see coming, Pokemon Brick Bronze, a Roblox game, is actually a very solid Pokemon title. Players have the option of choosing between a huge selection of starting Pokemon as you begin an all new Pokemon journey.

The game takes sprites straight from the handheld titles so you’ll feel right at home if you’ve played any Pokemon games in the past. The game is complete with IVs and shinies so all the features you’ve come to know from Pokemon over the years are in this game.

The game itself is still being developed so there are only seven gyms at the moment but more features are on the way. Despite being unfinished, there is a still a lot to do so don’t waste time and jump right in.

The survivors choose from a plethora of different boats as they try to survive the shark while also actively trying to kill it. There is also a wide array of weapons to choose from that are obtained by spending Shark Teeth. These teeth are obtained by surviving the rounds, finding a hidden treasure chest or by killing players with the shark.

Once a survivor is killed, they are forced to watch the rest of the action from the lighthouse on the island.

If you’ve ever played Dead by Daylight and want a Roblox alternative then this is the game for you.

One player enters the shoes of a killer with a mallet as he or she hunts down the four survivors. The team of survivors have to work together to have computers and get the exit door open. The killer is able to hunt these players down and put them in tanks where they will be frozen if nobody else comes to the rescue.

One positive of this game is it isn’t nearly as scary as Dead by Daylight is.

Who doesn’t love a good tycoon game? I can’t even begin to count the number of hours wasted in a tycoon game just clicking everything and building my base up.

It’s easy to spend a ton of time just collecting credits and building up your empire all the while bullying your neighbors. If you do decide to play a tycoon, make sure you get the Owner’s Door built as soon as possible so you can stop those players who live to ruin your day.

There are a ton of different tycoons ranging from superheroes, restaurants, cartoons and many more so you’re sure to find something you enjoy.

If you’re looking for a super simple, fun Roblox game that will remind you of your childhood playground days, look no further than Hide and Seek Extreme. Now, while this game has been available since 2015, it’s one that we’ve consistently played since, keeping it in heavy rotation.

In Hide and Seek Extreme, one player gets randomly chosen to be ‘it’. Obviously, the person who is ‘it’ has to find all of the other players (that’s 13 other players, for those wondering how many). The player will not spawn as their normal character, but instead, they’ll spawn as the ‘It’ character they’ve previously chosen.

Each ‘It’ character has a special ability to help them catch everyone else. There are a lot of cool map ideas here, too, so it’s definitely worth checking out.

Another one of our favorite Roblox games is Phantom Forces, a first person shooter game that takes inspiration from the Battlefield franchise. The game was created by StyLis Studios, and it’s intended to be the spiritual successor to the Call of Robloxia games.

The game uses guns inspired by actual, real-life guns like the M4 Carbine, MP5, and more.

Phantom Forces also features some unique movement abilities that you don’t typically see in other Roblox games, and it also uses unique mechanics like Bullet Drop, Muzzle Velocity, and more (in comparison, most other FPS Roblox games don’t have these external factors scripted). 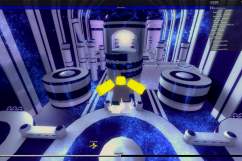 The Doom Wall 2 on Roblox: 10 Tips and Tricks