The Teenage Mutant Ninja Turtles are back to kick some shell once again.

And this time, they’ll be joining up with their many allies and enemies in a mobile RPG called TMNT: Mutant Madness. You’ll embark upon a grand city spanning adventure with your cast of iconic TMNT characters and engage in battles with a flood of recognizable baddies. That’s not all there is to this addictive game, however – there’s hero leveling to tend to, lair rooms production to keep track off, other player parties to duel with, clans to align yourself with, and many more jobs to fulfill. We’re here to help you get the most out of all those modes with this essential tips guide for your journey with Master Splinter’s heroic ninja turtles.

Here are the top five tips, tricks, and cheats you need to know for TMNT: Mutant Madness:

1. Put All Those Video Advertisements Boosters to Good Use

• As soon as you start up a fresh playthrough of TMNT: Mutant Madness, make sure you start up the Ad Boost if its meter is completely empty. Watch all six videos so you can get a 24-hour boost to the production rates attached to the many facilities enclosed within your lair. That way, you can busy yourself with the game’s other modes while your lair production works even harder for you in the background.

• And once you sign out of the game and step away for a full day, you’ll return to the game via a new login period and be gifted with tons of extra pieces of currency from your working lair production. That Ad Boost will always be responsible for that extra increase in lair production items. Whenever video ad watching opportunities pop up to give you bonus Battle Crate items and Hero Booster items, make sure to sit through them as well. Those seconds long videos are always worth the trouble, so never pass up an opportunity to watch them.

2. Level Up as Many Characters as Can, But Make Sure You Pour Most of Your Upgrades Into the Ones That are Capable of Attacks That Target Multiple Enemies 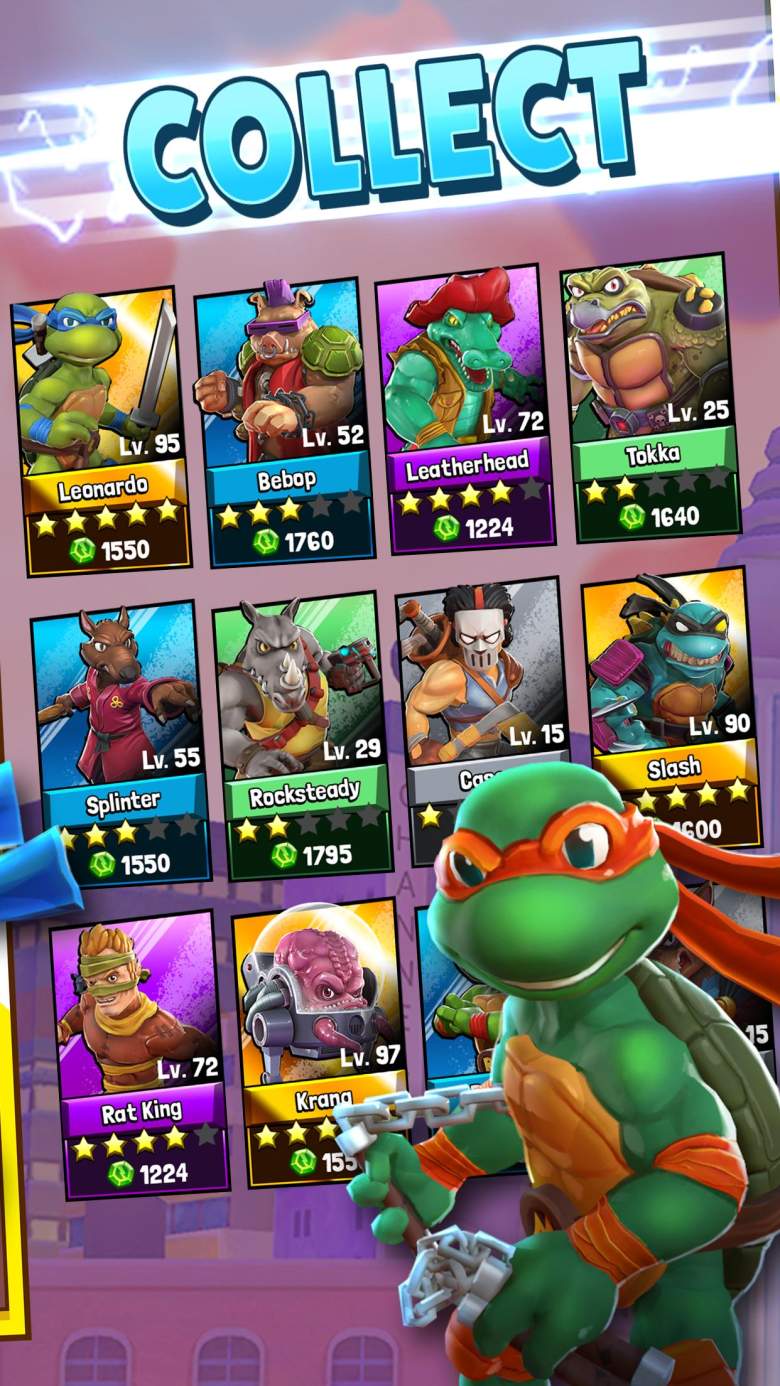 • As you complete achievements, open boxes, and keep your lair production facilities running, you’ll acquire the ooze canisters you need in order to level up your unlocked characters. Now, you’ll want to make sure you increase the overall power rating of each character you have within your collection. Having access to as many strong characters as possible means you can work with all types of different party configurations during adventure battles and the ones that take place within the Dimension Clash mode. And of course, you should make sure all of your unlocked heroes have their signature pieces of equipment attached to them.

• But the characters you’ll truly want to build into overpowered heroes are the ones that have the ability to utilize attacks that target and damage multiple foes. Characters such as Baxter, Bebop, Leonardo, Raphael, Super Irma, etc. are capable of using the types of skills that can damage multiple enemies at one time. Those types of heroes become essential over time as you run into tougher enemy parties, so you’ll eventually want to have a party full of overpowered heroes that can all pull off multi-enemy damaging attacks.

3. Fulfill as Many Achievements as You Can and Complete All of Your Limited Time Quests on a Daily Basis

• TMNT: Mutant Madness gives you all sorts of achievements to fulfill over the course of your time spent within it. You should always make it a part of your daily regiment to complete as many achievements as you can since you’ll walk away with an overwhelming amount of rewards by the time you decide to bring your game session to a close. Now as soon as you unlock the Season Pass portion of the game within your lair, make it your personal goal to complete all of the daily limited time quests given to you.

• Leveling up your season pass level helps you acquire new goodies, so it’s always worth completing all of those additional limited time quests to keep filling that season pass meter. Be sure to keep tending to your regular playthroughs of the game so you can place high in the rankings for seasonal and ooze economy events, too. The rewards granted to players who get placed high on the leaderboards for both events are useful and plentiful, so make sure you’re a part of those high ranking players.

4. Here’s The Proper Upgrade Order for the Lair’s Various Rooms 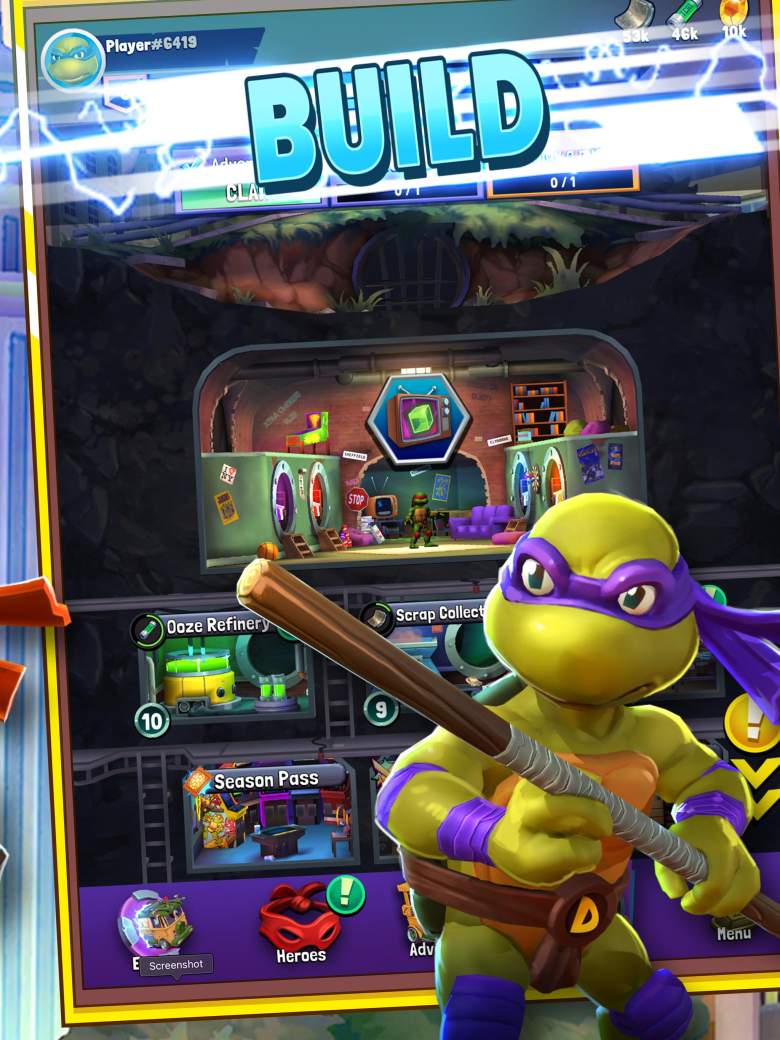 • As you complete new chapters/battles within the game’s adventure mode, you’ll begin to open new sections within your lair. While some of the facilities within the lair unlock new game modes, the ones you need to pay close attention to are the ones that gift you with items via their production jobs.

5. Keep on Battling Until You Run Into a Squad With a Higher Power Rating Than Yours 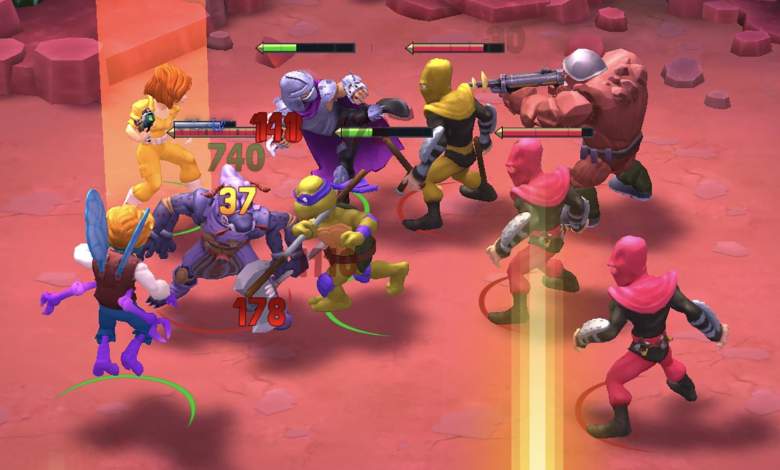 • During your time spent getting through adventure mode battles, it’s always best to go on as long of a winning streak as you can. Push your party of heroes as far as they can until they eventually encounter a set of foes that have a higher combined power rating than them. Once that happens, exit out of that current battle and use all the ooze canisters you’ve earned through your previous victories and Ooze Refinery lair production to quickly level up your unlocked heroes.

• Now if you still don’t have enough ooze to level up your heroes at the moment, go ahead and step away from the game for a few hours. By the time you return for a new playthrough, you should have enough ooze from your lair production efforts to kickstart the hero level up process again. Sticking to this method will ensure that your heroes will always have a higher party rating than their adventure mode rivals and also be prepared to encounter strong player parties in Dimension Clash mode.