We’re just about finished with January, which means we’ll on the verge of getting another exclusive Fortnite Crew Pack.

This new Season 5 subscription service gives players access to a skin, V-Bucks, the Battle Pass is they don’t already have it, and some extra cosmetics.

It’s a pretty good value when you consider how much a cool skin typically goes for in the Item Shop. With the Crew bundle, we’re able to get an exclusive skin and almost enough V-Bucks to buy another one, so it definitely ends up paying for itself in a lot of ways.

Enough fuss, let’s take a look at everything being offered in this upcoming bundle.

What’s in the February Crew Pack? 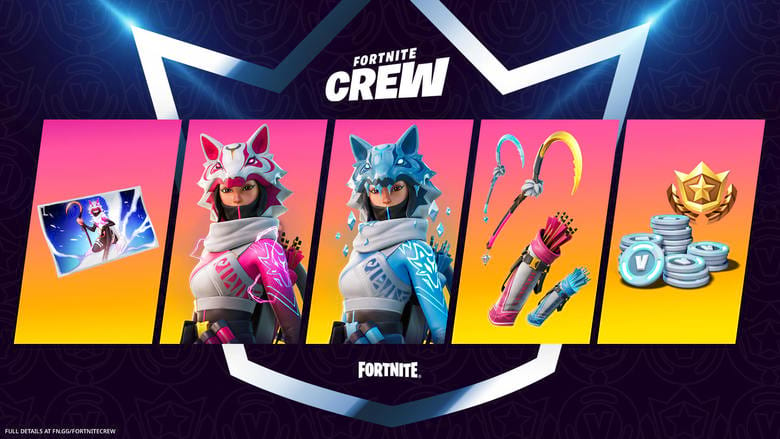 Epic did a good job of teasing this pack, which is a complete shift of gears from last month where they accidentally gave the skin to people early.

Those of you who own the Drift skin from Chapter 1 will have a friend in Vi, which is a female member of the Wolf Clan.

Here’s everything that’s listed in Epic’s blog post about the bundle.

In the image, you can see two different skins, but that’ll likely just end up being a variant style instead of a new cosmetic entirely.

According to Epic, the old bundle will be rotated out on January 31 around 7 p.m. ET, which is when the Item Shop updates, and at the time you should be getting the next set.

This means you have until then to decide whether or not you want the Green Arrow skin. Epic has said that anything that appears in the Crew pack will be exclusive, so if you like anything you see in these bundles, make sure you subscribe before it’s too late!

The membership costs $11.99 a month, so it’s not exactly the cheapest thing in the world, but if you like what you see then you have no other options.

READ NEXT: How to Get Fortnite Dog Eat Dog Spray For Free