We’re only into the second month of the Fortnite Crew subscription service and there have already been a plethora of problems with it.

Whether it’s people being unable to renew their subscription or getting their rewards late, it’s safe to say the rollout could have gone a lot smoother. To help win some goodwill back from the fans,

Whether you’re a previous subscriber, current subscriber, or even a future one, you can get your hands on a new emote.

It’s pretty simple to get, but here’s your reminder in case you’re taking a month off from Fortnite or something.

Members Only For Free 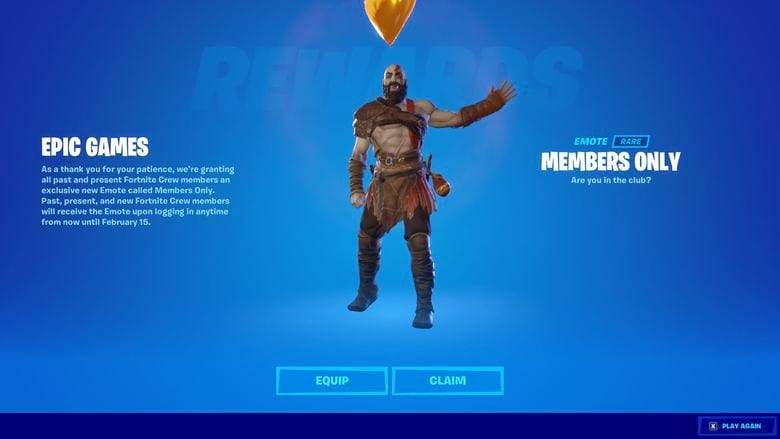 If you are a current or previous subscriber of the Crew service, all you’ll have to do is log into the game and claim your emote. This is being done because of all of the issues with the service so far.

“As a thank you for your patience, we’re granting all past and present Fortnite crew members an exclusive new Emote called Members Only,” writes Epic. “Past, present, and new Fortnite Crew members will receive the Emote upon logging in anytime from now until February 15.”

For me, it’s been a pretty successful month as I canceled my subscription last month but was still able to get Green Arrow and now this emote, so it’s like I stay subscribed in a way.

If you’re still on the fence about whether or not you should get the Crew pack, maybe this emote could help you make your decision. You have until February 15 until this emote disappears for good.

It sounds like this will be the only way to get your hands on the emote, so join the club!

Please note: if you’re subscribed to Fortnite Crew on Xbox and seeing an "Unable to claim recurring rewards" error while playing on other platforms, please log back into the game on Xbox to resolve the error message.

Unlike the January pack that introduced Green Arrow, it’s looking like Epic is going through some extra effort to not accidentally leak this one.

Green Arrow was given out early so some players, so the cat was let out of the bag by the developers themselves for a nice change of pace.

We still don’t have any information about the upcoming February bundle outside of the fact this emote will still be part of it if you become a new subscriber.

If you don’t have the Battle Pass yet, becoming a member of the Fortnite Crew will also unlock that for you.

READ NEXT: Where to Find Hop Rock Dualies Exotic in Fortnite

You can get a free emote called Members Only in Fortnite.