The cutesy feline that lives out her days on mobile devices is back!

My Talking Angela 2 marks the welcome return of the popular series’ cool cat. And this time, she’s embarking upon a personal journey that involves exploring her city digs and traveling the globe. As you check out the world’s sights and sounds alongside her, you’ll need to help her maintain her high levels of fashion, physical well-being, and so much more. Thankfully, the developers behind this super addictive kitty-raising simulator offered up some advice for everyone stepping into Angela’s exciting world.

Here are the top 10 tips, tricks, and cheats you need to know for My Talking Angela 2:

• Tap the games console in Angela’s bedroom to access her very own range of mini-games. All of these games start off simple enough but get more and more challenging as they progress, so they’re fun for novice and experienced players alike. And no matter your skill level, you always get rewarded at the end of the game, so mini-games are a great way to progress Angela towards her next outfit or trip abroad.

• Angela has just moved into a swish new apartment and, being the kind of girl she is, she wants to redecorate. In every room, you’ll find a little button with a paint roller on it. Tap that and you can customize the furniture and fittings. You can reinvent Angela’s home as often as you reinvent her look. In fact, for a truly stylish experience, always make sure the decor matches Angela’s clothing. And for a truly personal touch, paint a painting and hang it above Angela’s bed. 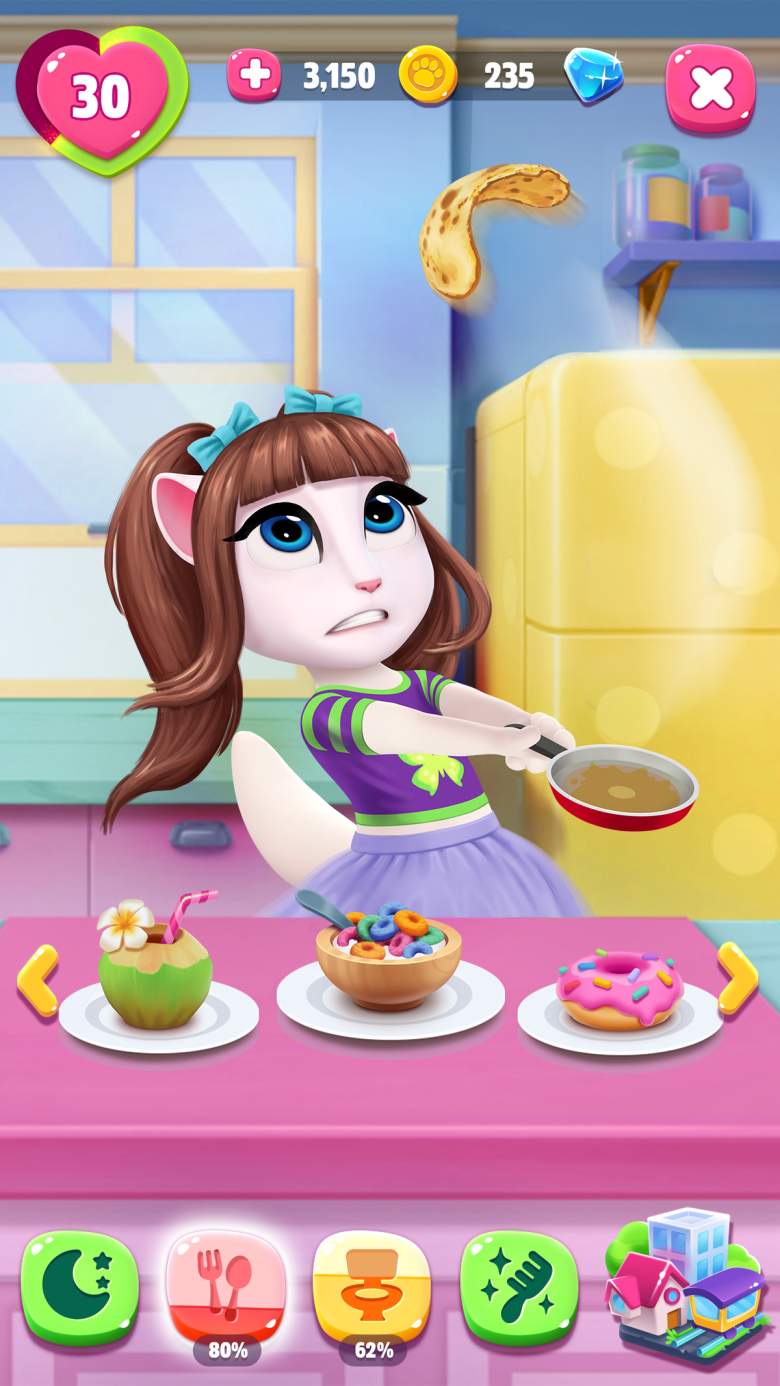 • Just like everyone else, Angela’s got to eat. Tap the fork and spoon button to go to the kitchen, and drag items off the counter into Angela’s mouth to feed her. Every time you feed her, the food meter fills a little. If you want to know which of the basic foods fills the meter for the least coins, it’s cereal.

• But for maximum value and maximum fun, you should always make a smoothie. Tap on the food mixer behind Angela, and drag two food items into it. The resulting smoothie will fill Angela’s food meter a lot, and might also have some other weird, funny effects. And don’t forget that if you really love feeding Angela, you can go in the fridge and get a potion that actually makes her hungry again. 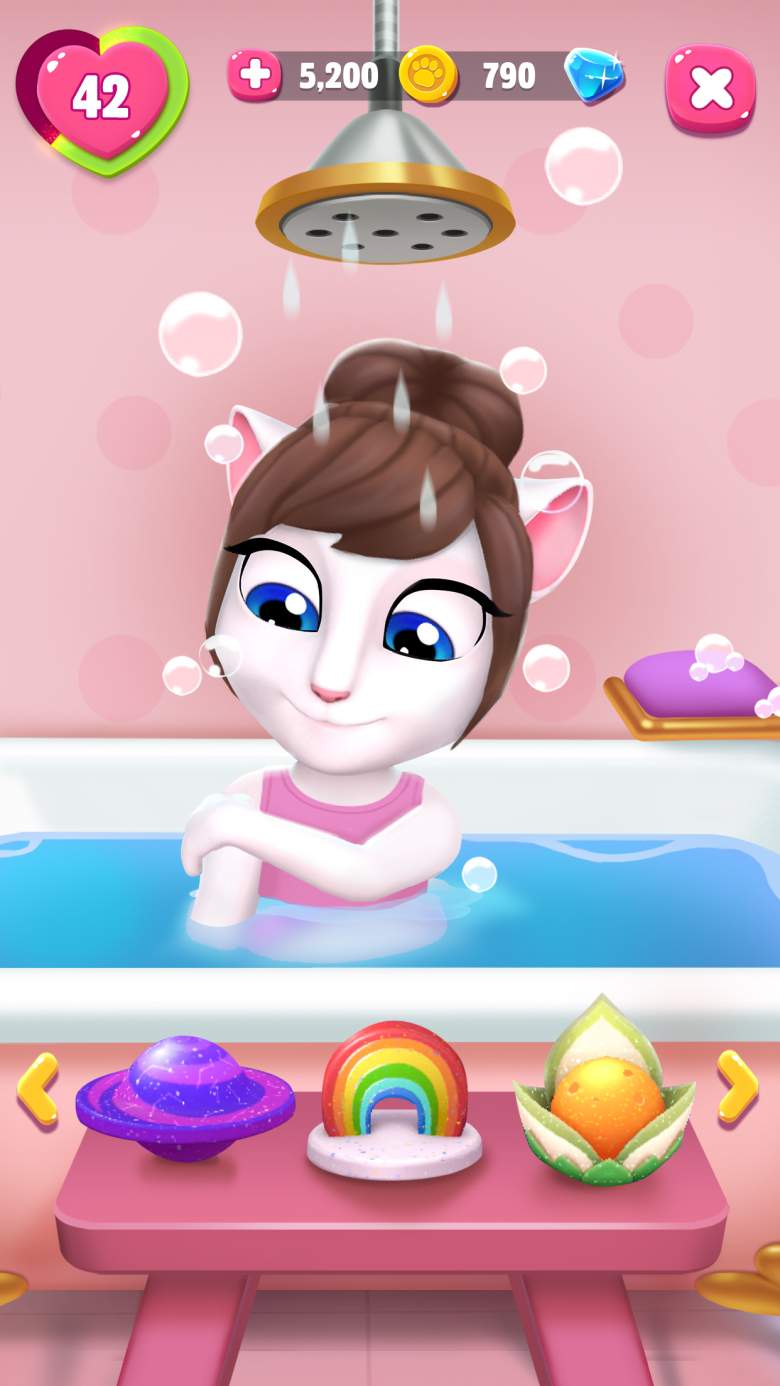 • Tap the toilet button to take Angela to the bathroom, which is where you can take care of all her hygiene and healthcare needs. Her most urgent need is usually the toilet, so tap on it and wait politely while she does what she’s got to do.

• If she’s eaten recently, you might notice some unsightly chunks of food stuck in her teeth, so tap on the sink then move her electric toothbrush along her teeth to leave them shiny white. Seeing a faint green cloud around Angela? That’s the game’s way of telling you she’s getting a bit smelly, so tap on the bath, choose a soap and rub it all over Angela until she’s covered in bubbles. Then rinse her off with the showerhead and she’ll be back to her fragrant self.

• Is Angela acting strange? Is she seeing stars? Does she have a bandage on her tail? Are her hands red, and her eyes twitching? Is she bouncing and spinning around, or coughing on glitter? These are all signs of a serious booboo, so tap on that medicine cabinet and use one of the cures inside to restore Angela back to health.

• Tap the hairbrush button to enter Angela’s boudoir, then tap the wig head to style her hair. Use the arrows at the bottom of the screen to choose a style, then customize the length and the color. Once you’re happy with her hair, pick up the brush and run it over Angela from head-to-toe. Do this regularly, otherwise, her fur will get messy and those carefully coordinated looks will be spoiled. 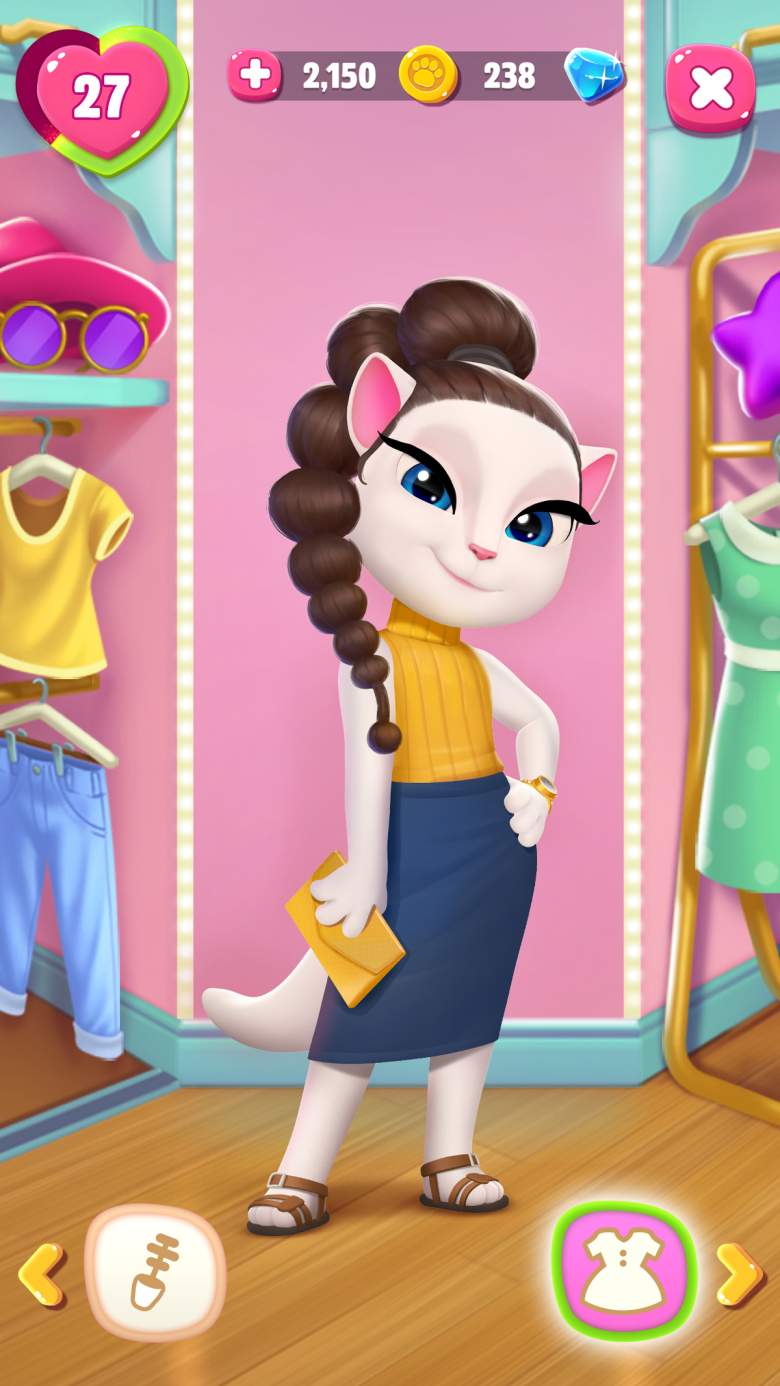 • Styling Angela is really at the heart of this game, and you’ll be spoiled for choice when it comes to garments and accessories to mix and match. Always remember that every item comes in a variety of colors and can be worn in so many different combinations with other items. Oh, and if you come up with a great outfit that somehow doesn’t match Angela’s fur, you can even change the color of her fur! Budding style gurus will spend hours on this feature alone.

• No Talking Angela look would be complete without the magic of make-up, and there are six types of make-up to apply in My Talking Angela 2: mascara, eye shadow, eyeliner, blusher, lipstick, and stickers. And each one comes in a huge range of colors and styles. Applying them couldn’t be easier.

• Just pick it up and move it towards Angela’s and she’ll present the correct part of her face, so there’s no danger of putting eyeliner on her lips, or lipstick up her nose or anything. While it’s fun to keep adding more layers, we have found that it’s usually best not to apply all six make-up types at once. It usually ends up looking more like warpaint this way. For best results, stick to a combination of 3 or 4 types. Unless warpaint is really your thing… 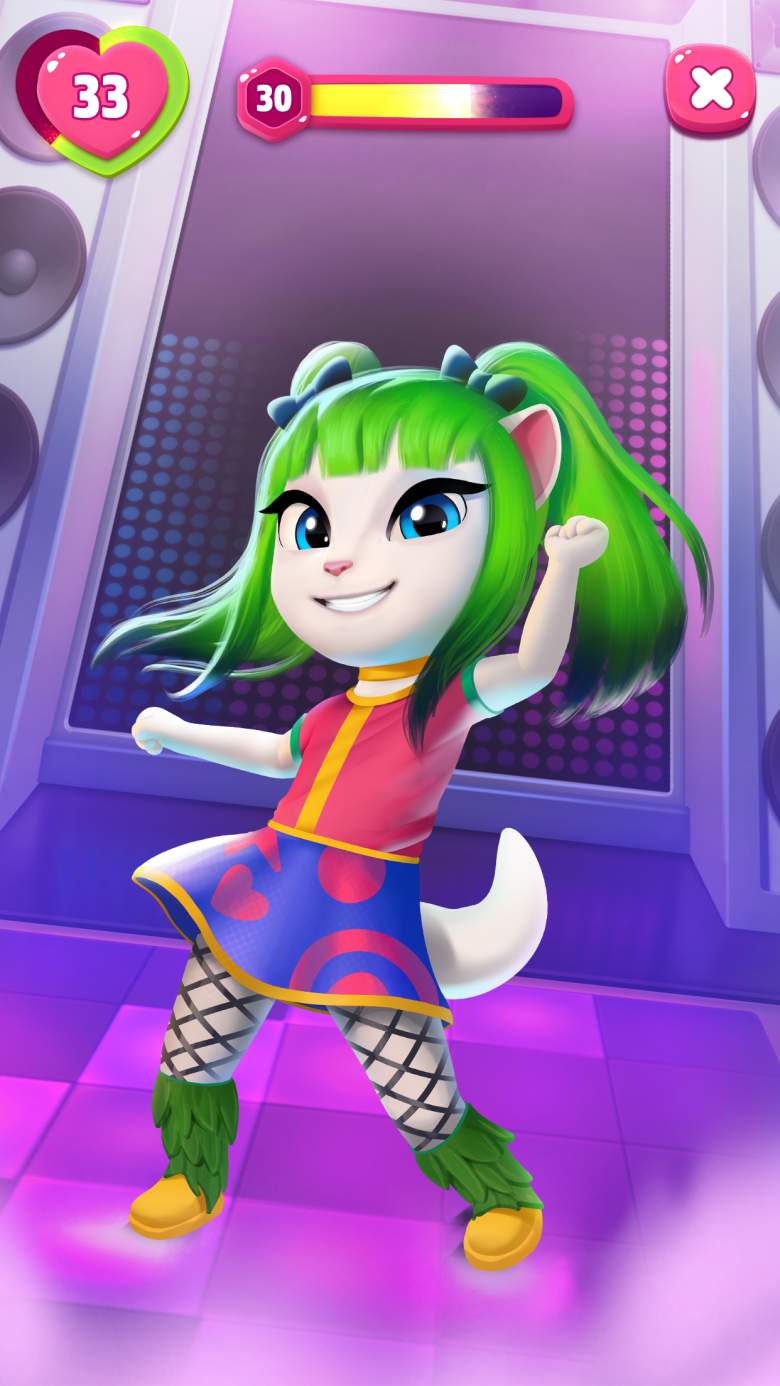 • The final button on the game screen is the city button. Tap this to take Angela into the city and beyond. There are three downtown locations where Angela can do fun, creative activities. If you have a sweet tooth, start at the Sweet Shop, where you can make sweet treats like cupcakes, ice pops, and ice cream. Or maybe you’re a superfan of the dancing feature in the first My Talking Angela. In which case, boogie on down to the Dance Studio and bust some moves. Finally, you can help Angela develop her pop career at the Music Studio, which has a range of instruments to try out. 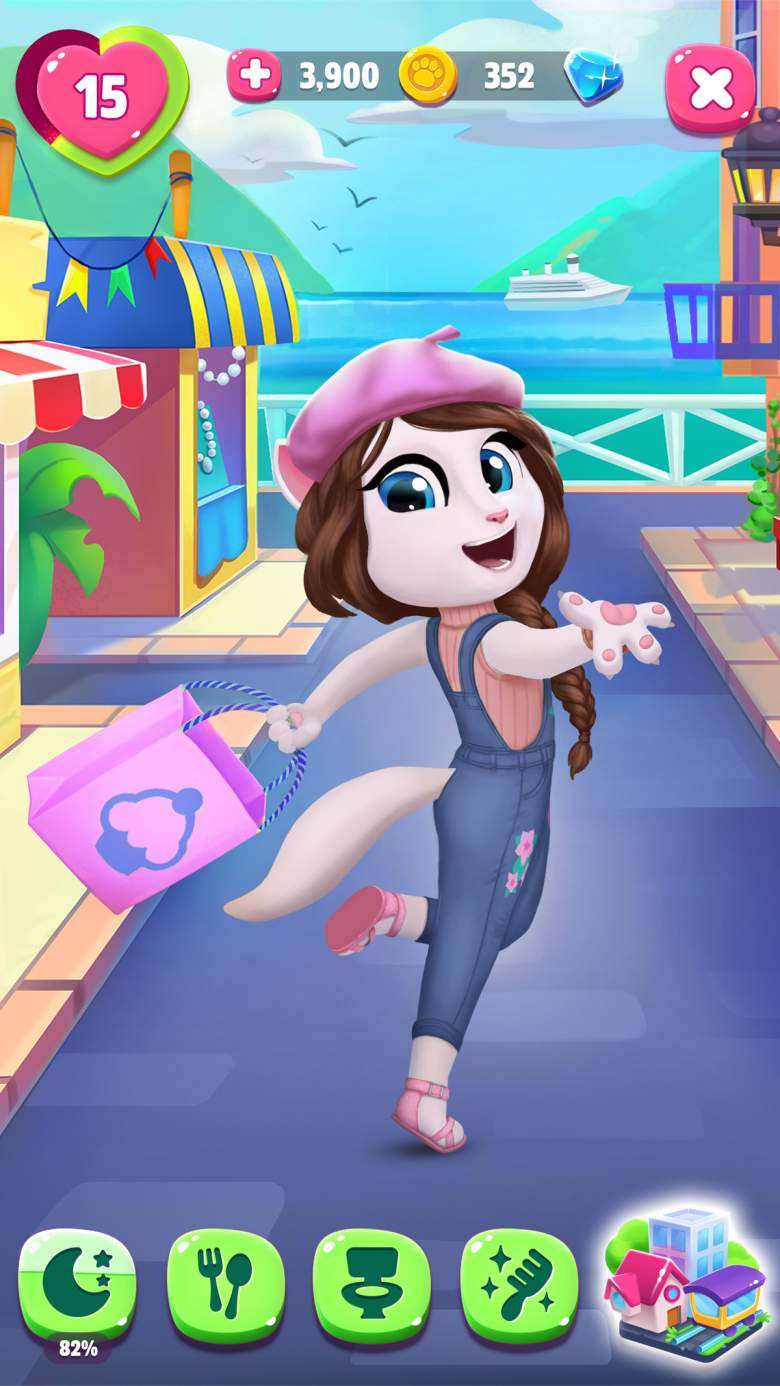 • Your other option on the city screen is to tap the airport shuttle bus, which will instantly whisk Angela to the departure terminal, where you’ll get to pick between three exciting destinations. Choose carefully! Whichever destination you choose though, Angela always has the same priority: shopping! She’ll come back with a bag full of food, currency, and, most important of all, a newly unlocked item!

10. Make Sure Angela Gets Enough Sleep 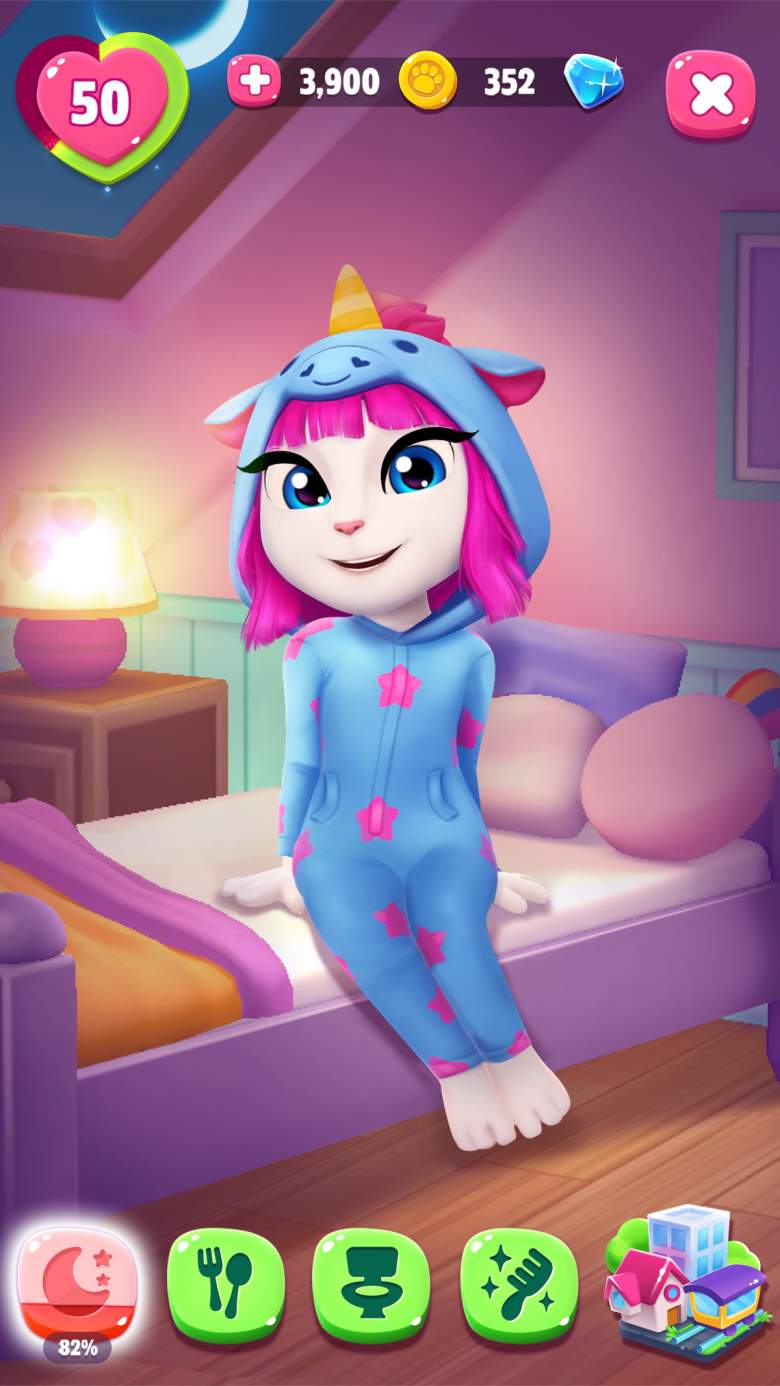 • Angela’s globe-trotting, big-city lifestyle is bound to tire her out, and eventually, she’ll get too sleepy to play mini-games or go to town. When this happens, tap on her bed, then tap on her bedside light and she’ll go to sleep for a while. But if you’re not ready to sleep yet, you can keep her awake longer with a magical energy potion. Find them in the refrigerator. You should also always put Angela to bed every time you shut down the game. That way she’ll be refreshed and full of energy next time you want to play.