The remains of a medieval knight were found under a parking lot in Scotland that is being demolished to make room for the University of Edinburgh’s Centre of Carbon Innovation, reports Scotsman.com.

While digging, workers stumbled into a sandstone slab with the markings of a member of nobility, the Calvary Cross and an ornate sword. Archaeologists uncovered an adult skeleton in the immediate area that they believe was likely to have once occupied the nearby grave.

The area of the site was already known to have been the site of the 18th century Old High School, the 16th century Royal High School and the 13th Century Blackfriars Monastery. The location was founded in 1230 by Alexander II, but destroyed during the Protestant Reformation in 1558.

“This find has the potential to be one of the most significant and exciting archaeological discoveries in the city for many years, providing us with yet more clues as to what life was like in Medieval Edinburgh,” Richard Lewis, the City of Edinburgh council culture convener, said.

Tests will be performed on his teeth and bones to discover how he lived and died.

The discovery comes just a month after the remains of the English King Richard III, who was killed in battle in 1485, were found, also under a parking lot. 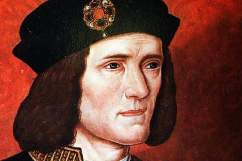 Loading more stories
wpDiscuz
0
0
Would love your thoughts, please comment.x
()
x
| Reply
The 13th century grave has the markings of a member of nobility, the Calvary Cross and an ornate sword.