Suspect in custody. Officers sweeping the area. Stand by for further info.

Dzhokhar Tsarnaev, aka the Boston Bomber, aka Suspect Number 2, aka “White Hat,” is in custody — though severely injured — after a dramatic turn of events this evening.

Just minutes after law enforcement announced a lift of the lockdown that trapped residents in their home amid a massive tactical manhunt — and it seemed as if the suspect had slipped through their grasp — rapid gunfire and loud explosions rang out at 67 Franklin Street in Watertown.

There, in a residential neighborhood near an empty lot once slated for a WalMart, an army of cops and agents had converged on a report of a bleeding body — dripping from a covered boat parked in the yard. A man saw the blood and lifted the tarp, discovering Tsarnaev “covered in blood,” according to a post-capture press conference.

Infrared sensors from a police helicopter detected the suspect’s heat signature and confirmed he was in the boat, alive.

According to various witnesses and reporters via live broadcast, more than two dozen gunshots were heard as cops and the suspect exchanged gunfire for an hour.

After an extended, cautious standoff — as the danger with Tsarnaev is always that he may be packing explosives, in his bag or on his person — the suspect was taken alive as agents approached and pulled him from the boat and loaded him into an ambulance.

It’s believed the suspect was suffering wounds from the night before, when he and his brother engaged in a massive gunfight with cops in Watertown. In that incident, some 200 shots were fired as the Tsarnaev brothers wielded homemade bombs and grenades.

This after cops chased the brothers from Cambridge, where they allegedly assassinated an officer sitting in his car on the MIT campus. It was three days after the horrific Boston Marathon bombing.

As public servants, federal and state agents and local police celebrated the dedication and teamwork that led to Suspect Number 2’s capture, they took time to remember that four innocent victims are dead and many more maimed or seriously injured. Following are the three victims killed in the marathon bombings and the police officer brutally executed at MIT: 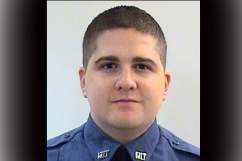