Occasionally you have days that are ridiculously exciting. Today is such a day.

Planning something truly momentous with @virgingalactic today – watch this space

Billionaire playboy and pioneer Richard Branson was celebrating on Twitter this morning before a groundbreaking test flight of Virgin Galactic’s SpaceShipTwo, a craft that aims to make routine civilian space flight a reality.

NBC reports the spaceship today fired its rocket engine during flight for the first time:

[Mother ship] WhiteKnightTwo released SpaceShipTwo from its traditional drop zone, at an altitude of around 50,000 feet. But after the rocket plane glides clear from the mothership, its pilot lit up the engine and pointed SpaceShipTwo upward into the sky for a roughly 16-second blast.

Branson later confirmed via Twitter and on his blog than SpaceShipTwo had broken the sound barrier:

This is a momentous day and the single most important flight test to date for our Virgin Galactic program. What a feeling to be on the ground with all the team in Mojave to witness Virgin Galactic go faster than the speed of sound. It marks the moment when we put together two key elements of our spaceflight system – the spacecraft and its rocket motor, which have both been tested extensively by themselves over several years – and start the phase of testing that will demonstrate our vehicle’s ability to go to space (hopefully later this year).

What a feeling to be in Mojave with all the team to witness @virgingalactic go faster than the speed of sound virg.in/bsb 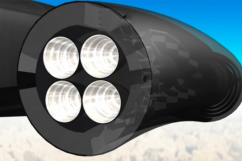 Engine Breakthrough Takes Us ‘Beyond the Jet Age,’ Makes Space-Plane a Reality