In a story sure to provide ammunition for gun advocates, a store clerk in Michigan scared off two masked robbers by whipping out a loaded AR-15 rifle.

Shawn Schank, a former National Guardsman who served time in Afghanistan, told TV6’s Gabrielle Mays that he was heading to the restroom at his convenience store in Shingleton, Upper Michigan, “when he noticed the two men trying to steal from the empty cash register.”:

They were trying to hide behind the counter and I kicked one into the other one. When I kicked him and pulled out the gun, he took off his mask so I would recognize them.

The would-be thieves begged for their lives and ran out the door.

I don’t care if people try to rob. I will respond the same way. 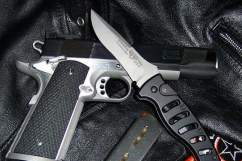