Michael Olumide Adebolajo is one of the men accused of committing the horrible machete attack in London yesterday that killed a British soldier. Adebolajo has been identified as the 28-year-old man shown in a video with bloody hands holding a meat-cleaver after violently beheading a British soldier in broad daylight in Woolwich, England on Wednesday. He and an accomplice, identified as 22-year-old Michael Adebowale, reportedly hit the 28-year-old soldier, Lee Rigby, with a car, got out and then hacked him to death until he was beheaded. In the video taken by a witness with their cell phone, Adebolajo rants about jihad and the British government. The incident is being considered a terrorist attack.

Adebolajo was born in Lambeth, England and grew up in Romford, reports The Guardian. He attended Marshalls Park school in Romford and later studied at Greenwich University. 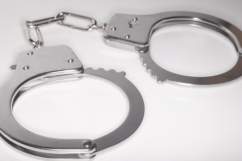 His parents are reportedly Nigerian immigrants who settled in London in the early 1980s.

4. Adebolajo Comes From a Christian Family

His family were practicing Christians and attended a local church.

“His family were very Christian, him and his siblings are all religiously named,” said a former classmate of Adebolajo, 25-year-old Simon Collings. “His brother, Jeremiah, and his sisters, Blessing and Christiana.” 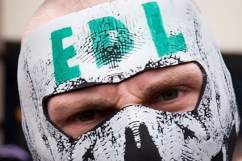 5. Old Friends Describe Him as a ‘Regular Guy’

Friends of Adebolajo growing up describe him as a regular guy” and couldn’t believe it when they saw him on the news.

“He was a Christian. A nice, normal guy,” a former friend said. “All his friends were white and used to go round to each other’s houses all the time.”

An old classmate described him as a “good guy.”

“He was always a good guy at school and [would] do anything for anyone,” classmate Darren Marsh said.

6. He Got Into Drugs

It wasn’t until later in his teens did Adebolajo’s life start to take a turn for the worst. He get into smoking marijuana and even started dealing. Another classmate said that Adebolajo turned violent, holding knives up to people’s throats and stealing their phones.

7. The Suspect was Radicalized 10 Years Ago

At the age of 15 or 16, Adebolajo became interested in Islam and formally converted, taking the Muslim name “Mujahid,” or “one who fights Jihad” around 2003.

8. He Has Been Involved in Violent Protests by Extremists

The Telegraph reports that Adebolajo was arrested after being involved in violent protests by extremists outside the Old Bailey, the Central Criminal Court of England and Wales. He has also been seen preaching anti-Western rhetoric in Woolwich as recently as last week.

9. He Was Reportedly Influenced by Anjem Choudary It is said that Adebolajo was radicalized by Anjem Choudary, one of Britain’s most notorious hate-preacher. Choudary said the man regularly attended meetings and demonstrations held by his banned group al-Muhajiroun. Choudary said that he was shocked by the news of the attack, but that he does not condemn or condone it.

“I would not encourage someone to do it,” Choudary said. “I don’t think it helps to condemn or condone. I condemn the hundreds of thousands slaughtered by British and American foreign policy.”

10. Adebolajo Was Shot by Police

Adebolajo, along with his accomplice, was shot by police, but their injuries were not fatal. Both suspects are recovering under heavy watch at two different London hospitals.

Loading more stories
wpDiscuz
0
0
Would love your thoughts, please comment.x
()
x
| Reply
Michael Olumide Adebolajo is one of the men accused of committing the horrible machete attack in London yesterday that killed a British soldier.