UPDATED to include new information

As of now it is still unclear what motivated the American woman identified as Michigan native Nicole Lynn Mansfield to travel to Syria where she was killed by the Syrian Army this week. However, in the process of searching for a motive, we uncovered record of Mansfield’s brief marriage to Ayman Mohammed Bafil from early July 2010 until their divorce in August of 2011.

The age of the woman described the Syrian incident matches with these documents, but little to nothing is found on Bafil. Even Mansfield herself and all of her known aliases conjure little information.

Their names appear on a list of marriage licences issued from July 5-9 2010.

Their names appear again on a local newspaper’s list from August 2011 of divorce filings.

According to conformation in a new interview with family members of Nicole Lynn Mansfield, she was in fact married to an Arab immigrant for a short time. Mansfield’s Aunt, Monica Mansfield, speculates in the interview that Mansfield likely converted to Islam for her husband, and that the two were divorced after he was able to get a Green Card for prolonged residence in the United States. 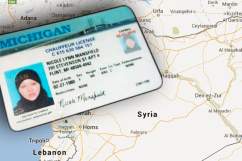 Details Emerge on the Family of Nicole Lynn Mansfield, American Killed in Syria

We’re not quite sure what to make of this at the moment, but in our objective to understand Mansfield’s motives we will disseminate what we discover.