Massacres. Violence on the streets of its cities. A growing refugee crisis. Calls for international intervention.

Brutality is an everyday ordeal for the devastated country that has been suffering through a two-year-long civil war that has pit government forces against rebel fighters. When looking at the humanitarian crisis that has evolved in Syria, it is difficult to understand how it got to this point.

Here are the top facts you need to know about the Syrian Revolution which has morphed into the Syrian Civil War.

1. The President of Syria is Bashar al-Assad

President Bashar al-Assad stands at the forefront of the confrontation. Bashar has been president of Syria since 2000, taking power after his father Hafez — the 30-year leader of the country — died. Interestingly, Bashar was not expected to be his father’s successor. His older brother, Basel, was in line to take power, but Basel died in a car crash in 1994. When Bashar took office at the age of 35, the world, particularly Western nations, were hopeful that he was to be more moderate than his father, who was a strong Soviet ally. After all, Bashar was young, Western-educated and was studying in London to become a doctor.

The al-Assad family in 1994 before Basel’s death.
The Assad family. Hafez al-Assad and his wife, Mrs Anisa Makhlouf. On the back row, from left to right: Maher, Bashar, Basil, Majid and Bushra al-Assad.

The Assad family is ethnically Alawite — a Shiite Muslim offshoot, which is a small minority in Syria. Al-Assad’s  political party is called the Arab Socialist Ba’ath Party.

Tunisians celebrate on December 17, 2011, in Sidi Bouzid, the Mohamed Bouazizi square, named after the fruitseller whose self-immolation sparked the revolution that ousted a dictator and ignited the Arab Spring. (Getty Images)

December 2010 marked the beginning of the revolution in Tunisia, which started of the so-called Arab Spring — a media term for a revolutionary wave of nonviolent and violent demonstrations in the Arab world that began in 2010. Tunisia’s uprising was so successful that it inspired other countries who were also experiencing political repression, autocratic leaders, corruption and high unemployment.

3. The Revolution Began as a Peaceful Protest

Syrian men living in Jordan shout slogans during a demonstration against Syria’s President Bashar al-Assad in front of the Syrian Embassy in Amman. (Getty Images)

Syria’s protest started out peacefully, but in March 2011, violence broke out. The conflict turned bloody in the city of Daraa, where a group of children and teenagers were arrested for writing political graffiti. After attempts to negotiate the release of the children were rejected by the government, peaceful protests ensued. This marked the beginning of a brutal crackdown from President Al-Assad’s regime as dozens of people were killed and detained after government security forces were called to stifle protests. Massacres in the city were also carried out.

What began in Daraa later spread toward the rest of the country as rebels began organizing themselves for protection against government persecution. By summer 2012, the revolution reached Syria’s Capital of Damascus, as well as Aleppo, its largest city.

4. The Humanitarian Crisis is Catastrophic

The ground reality in Syria today is miserable on all fronts as massive destruction has accompanied staggering increase in civilian deaths. According to the latest estimates by the United Nations, more than 70,000 Syrians have been killed in confrontations so far. This figure continues to rise as the average of deaths per month is approximated at about 3,000. There is also a staggering refugee crisis as 3 million Syrians have been forced to leave their homes, flocking to refugee camps in neighboring countries.

Atrocious war crimes are also being documented throughout Syria.

Internally displaced Syrian families spend their day at the Maiber al-Salam refugee camp along the Turkish border in the northern province of Aleppo on April 28, 2013. The number of Syrians who have fled their conflict-ravaged homeland has surpassed 1.4 million, the United Nations refugee agency said, warning that it was no longer able to meet their medical needs. (Getty Images)

Through the use of social media sites such as YouTube, the world has been able to see the atrocities committed by both sides. Beheadings, mutilations and massacres have all been documented on phones and uploaded for anyone to see. The ubiquity of camera phones and social media are enabling a mixture of propaganda, intimidation and boastful exhibitionism. In this, the first YouTube war, war crime videos have driven the conflict even as they document its horrors.

Videos such as one uploaded in December 2012, which showed a child beheading the body of a Christian man at the request of rebel forces, prompt a troubling question: How do countries who want to support Syria’s rebels make sure they’re not unintentionally aiding rebels who might commit war crimes?

Syria has been historically diverse. Although there is an overwhelming Sunni Muslim majority (about 70 percent), the population includes Christians Kurds, Alawite and other Muslim minorities. Under the current Baathist regime, these differing ethnic groups have generally co-existed peacefully. However, as confrontations continue, the civil war has taken an increasingly ethnic dimension.

As previously stated, President al-Assad’s regime is Alawite, while the great majority of the country is Sunni. Minorities have allied themselves with Assad as their is fear that — if the Sunni majority gets into power — there could be a ethnic sectarian battle, much like the one seen in Iraq between the Sunnis and the Shiites. Sectarian undertones can also be seen with opposition claims that the government is targeting Sunni families.

Since Syria’s brutal civil war started, there have been countless videos uploaded onto YouTube of beheadings, executions and the aftermath of massacres. However, recently videos have shown the deepened ethnic sectarianism never before seen in this conflict.

For example, a viral and explicit war crime video showing a rebel commander eating the heart of a dead government soldier shows the sectarian hatred which has brewed as a result Syria’s violence. As the Sunni rebel commander mutilated the corpse of the soldier he is recorded saying,  “I swear to God we will eat your hearts, Alawite soldiers of Bashar the dog,” referring to supporters of President Bashar al-Assad from the minority Alawite sect. The commander, identified Al Hamad, has said in interviews that he harbors a sectarian hatred for Alawite Muslims, and has revealed that he has other gruesome videos of him killing soldiers of the Alawite faith.  Other videos such as this one reveal the same ethnic tensions.

6. The Opposition Has Become Larger and More Organized

Rebel fighters from the Al-Ezz bin Abdul Salam Brigade attend a training session at an undisclosed location near the al-Turkman mountains. (Getty Images)

The Syrian opposition is not a unified force but an umbrella of groups and individuals. The largest of these groups is called the Free Syrian Army. Many of the fighters are ex-soldiers who defected from the military, but there are also civilians who have taken up the fight against the al-Assad regime.

The militant terrorist group Hezbollah has showed its support for Al-Assad’s government. Meanwhile, AP reports show that just last month, the leader of an Islamic extremist rebel group in Syria pledged allegiance to al-Qaeda. This new allegiance underscores the growth of Islamic radicals fighting on the rebel side of Syria’s war. It also helps bolster Syrian government assertions that the regime is “battling terrorist.” Al-Assad has told Western nations, “Syrian rebels will turn on you.” warning that rebel groups will one day strike the U.S. and others.

8. The United States and al-Qaeda are on the Same Side of the Syrian Conflict

AK-47 machine guns hang in a shelter for Syrian rebels in the Salaheddine district of the northern Syrian city of Aleppo on April 12, 2013. A major coalition of Islamist rebels fighting the regime of President Bashar al-Assad has denounced Al-Nusra Front’s pledge of allegiance to al-Qaeda, urging insurgents to unite behind moderate Islam. (Getty Images)

This may be hard to wrap your head around, but it’s strangely true. Al-Qaeda and the U.S are essentially rooting for the rebels in this civil war. The United States has even considered arming the opposition. However, the fact that al-Qaeda is now involved in the conflict has thwarted U.S arming efforts amid fears that weapons could land into the hands of religious extremists. Rebel factions deemed more moderate have received the support of the United States and its allies.

9. The World is Divided on Syria

U.S. Secretary of State John Kerry and his Russian counterpart Sergei Lavrov speak at their joint press conference in Moscow on May 7, 2013. Russia and the United States agreed to push both the Syrian regime and rebels to find a political solution to their conflict. (Getty Images)

The Arab League is a regional organization of the Arab states in North Africa and Southwest Asia. A proper comparison is that it’s like a European Union for Arab nations. The league is interestingly divided when choosing sides in the Syrian conflict. Saudia Arabia, Qatar and Turkey have supported insurgent resistance, while Iran and Lebanon’s Hezbollah have allied themselves with Assad’s government. Russia has also been outspoken about its support for al-Assad. Conversely, the United States, France, Israel are against Assad.

The U.S has condemned Russia’s support of President al-Assad and has outspokenly denounced Russia’s sale of advanced surface-to-air missiles to Syrian government. 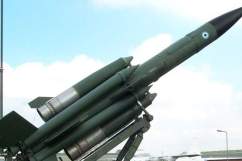 10. Chemical Weapons are Believed to Have Been Used in the Conflict

Syrian troops photographed during a gas mask training exercise during the run up to the first Gulf War. (Getty Images)

The White House has officially stated that it believes forces loyal to Syrian President Bashar al-Assad use chemical weapons against rebels. Although U.S. intelligence has emphasized that “more assessments were needed,” the U.K. Foreign Office echoed U.S. claims, saying it too had “limited but persuasive information from various sources” of chemical weapons use in Syria.

Israeli intelligence sources have reached similar conclusions and added that satellite images coupled with witness testimony had determined the use of Sarin, a deadly “nerve agent.” Similarly, recent photographs depicting victims with “constricted pupils and foam coming from their mouths” are consistent with the use of a nerve agent, reports The Economist. Sarin has been classified as “a weapon of mass destruction” by the United Nations and has been outlawed by the Chemical Weapons Convention of 1993.