The 1-year-old daughter of a Dallas elementary school teacher died on Friday after the mom left her locked inside a hot car — at the school.

Vibha Marks, 42, who has a master’s degree in nutrition and lists “wellness” as an “expertise” on her LinkedIn profile, was jailed and charged with felony child abandonment.

A teenager who works as a teacher’s intern at the Frank Guzick Elementary School made the gruesome discovery. She noticed the toddler, Victoria Marks, early Friday afternoon, as temperatures soared into the 80s in the Dallas area.

The intern, a high school senior named Exenia Gomez, described her horror to the Dallas News:

I looked over and saw that there was a baby in there. I looked at the baby and she wasn’t moving. She had dried bubbles on her face and her eyes were still looking down.

Gomez called 911, and the operator told her to get the girl out of the car. The quick-thinking teen found a piece of wood in her truck and smashed a window, then attempted CPR. But it was too late.

In a tragic twist, Friday was Vibha Marks’ birthday, and her daughter’s first birthday was the day prior.

Marks has been suspended from her job. She worked for the school district for three-plus years but recently moved to her position at the Frank Guzick school.

The district issued a statement saying “Our thoughts and prayers are with the teacher and her family at this time, as well as the staff at Guzick Elementary.”

Marks has a Blogger.com profile that describes her as food writer with a master’s degree in nutrition:

Her LinkeIn page says she aims to “better lives around the globe and give back to the society at large.” 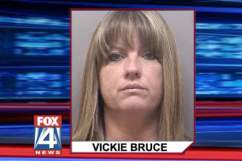 Texas Grade-School Teacher Admits Getting High on Meth Before Teaching

Loading more stories
wpDiscuz
0
0
Would love your thoughts, please comment.x
()
x
| Reply
The teacher has a master's degree in nutrition and lists "wellness" as an "expertise" on her LinkedIn profile.