If you live in New Jersey or the surrounding area, brace yourself because this is going to be a bad summer with mosquitoes. In fact, experts say an “extremely aggressive” and an “obnoxious” breed called the Asian Tiger Mosquito is going to swarm the area. Here’s what you need to know about the annoying pests and how you can prevent getting bitten.

1. It’s Named for the its Stripes

The pesky insect is named the Asian Tiger Mosquito because of its black and white stripes on it legs and body.

2. It Was First Brought to Texas in a Shipment of Tires

Asian Tiger Mosquito distribution as of 2000 (Centers for Disease Control)

The mosquitoes have been in the United States since the 1980s and in New Jersey for the past decade, but they are about to really swarm household residences this summer, reports CBS News. They were first brought to the U.S. in a shipment of tires and have since spread to 26 states. The pests can also be found in South and Central America, southern Europe and several Pacific islands. The mosquitoes have also been multiplying more rapidly in part to a warming climate.

Unlike the usual mosquito found in the U.S., the Asian Tiger Mosquito doesn’t just come out at night. They will attack you for your blood at any time of the day and are much more aggressive at it.

“Part of the reason it is called ‘tiger’ is also because it is very aggressive,” Dina Fonseca, associate professor of entomology at Rutgers University, told the
Wall Street Journal. “You can try and swat it all you want, but once it’s on you, it doesn’t let go.” 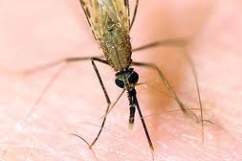 The mosquito is also known for being particularly good at spreading diseases. The Asian Tiger transmits more than 20 diseases, including West Nile fever, dengue fever, yellow fever and two types of encephalitis. It also can transmit chikungunya virus, an infliction that is rarely fatal, but causes debilitating symptoms, including severe joint pain, fever, achiness, headache, nausea, vomiting, rash and fatigue. People usually recover in a few weeks, but the virus is not very pleasant.

5. Remove Still Water to Get Rid of Them

Experts advise wearing insect repellant and covering up with long-sleeved shirts and pants, but also to remove all sources of still water. Mosquitoes don’t breed in running water, but where it is stagnant. 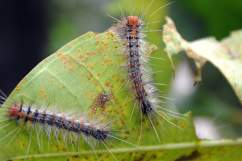 Thousands of Caterpillars Found in Passenger Luggage at London Airport