Heavy was able to get in touch with the brother of Michael Karkoc (pictured above), a former Nazi commander who was recently found living in Minneapolis, Minnesota, as the result of an investigation by the Associated Press.

Peter Karkoc, 86, was reluctant to tell us too much about his brother, 94, and did not even know the AP had released the story.

He did, however, confirm that his brother had been living in Minneapolis since 1949 and was remarried to a woman named Nadia, with whom he had children. Peter Karkoc said he emigrated to the U.S. years after his brother arrived.

Peter Karkoc said he was 9 years old when the war broke out in Europe, but would not comment on his brother’s military service. “We went through hell during the war,” he said. 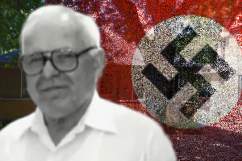