UPDATE: He’s done it! Wallenda successfully completed his death-defying walk across the Grand Canyon — made all the more perilous by high winds that forced him to “take a knee” at one point. Unbelievable. Nik Wallenda (R) and his wife Erendira Wallenda (L) pose for a photograph at Circus Sarasota on February 15, 2013 in Sarasota, Florida. Nik Wallenda is planning to walk on a high wire over the Grand Canyon this summer. (Photo by Tim Boyles/Getty Images)

This Sunday, Florida-based stuntman Nik Wallenda, 34, will become the first person to cross the Grand Canyon on tight-rope, without the help of any safety harness. And all the action will be broadcast live on the Discovery Channel Sunday night at 8:00 p.m. EDT, reports the New York Post.

1. The Crossing Will Be Broadcast With a Ten Second Delay

For seemingly obvious reasons, Skywire Live With Nik Wallenda, which airs on Sunday, will come with a ten second delay. Discovery Channel Producer Howard Swartz told the Post that this is standard practice:

We always have a standard delay on live events for whatever reason, so this is pretty common and we have contingency plans for any eventuality.

But there won’t be a net and Nik won’t have a harness, that was his decision and the way his family has done it for generations — without a net, without a tether.

Or four football fields to you and me. Wallenda will be walking at around the same height as the Empire State Building, above the Little Colorado river. The walk should take about 30 minutes to complete. The Discovery Channel are adamant that any reports of lightning within a 15-mile radius and Wallenda’s walk will be canceled.

Wallenda understands that some people are “freaked out” about his willingness to do the walk without a harness. He told the Toronto Sun why he usually wears one:

Most of that has to do with lawyers, of course.

I would say a quarter of the people watching are watching in case I fall. Even more than that. A lot of people watch NASCAR, and it’s not necessarily to see the winner, it’s to see the accidents. That is part of human nature and I’m just as guilty as anyone else.

I understand why it freaks others out. But it was part of my negotiations.

Wallenda spoke about his preparations on the Today show:

3. Discovery Have All the Angles Covered

Rain held off for another great walk! One more at 6pm before leaving to the canyon! #skywirelive #nevergiveup pic.twitter.com/B4ID2tvN17

In addition to the 18 cameras that Discovery have set up around the remote part of the Canyon that Wallenda will walk, the walker himself will have two camera on him. This will allow the viewer to experience what Wallenda experiences, minus the terrifying notion of plunging to your death. Producer Howard Swartz says:

We’ll have cameras on the bottom of the canyon looking straight up and we’ll have one camera strung across the canyon, away from Nik but parallel to him, to track him as he goes.

The walk is taking place on land that is owned by the Navajo Nation. Wallenda’s agent, Winston Simeone, spoke about the logistical problems at the selected location, including “lack of electricity, lack of hotels.”

Navajo Parks and Recreation strives to preserve and protect tribal park land for the enjoyment of all visitors. We use our land and all elements of life as teaching tools for our youth and visitors from afar, we welcome this special event and the community is excited to be a part of it.

Wallenda is a fan of the location:

We found a location where I won’t be on the wire for more than half an hour, hopefully. But the place we found is absolutely breathtaking, it’s 1,500 feet high, about 1,400 feet across, in that ball park.

4. Wallenda Comes From a Long Line of Wire Walkers, and the Sport Killed His Great-Grandfather

People say I’m insane all the time, but they don’t understand that this is something I’ve done since I was 2. It’s just in my blood.

The Wallenda tradition goes back seven generations back to his family’s origins in the Austro-Hungarian empire, at that time the Wallendas were famous for performing in circuses as trapeze artists.

Nik Wallenda’s great-grandfather, Karl, was killed, aged 73, in Puerto Rico in 1978 performing a tight-rope walk between to hotels. The day was windy and Nik maintains his father’s rigging had not been properly stabilized resulting in his death.

He just didn’t have the strength to hold on, if he had the strength, if it was 20 years before, he’d be alive to this day.

In 2011 as a tribute to his fallen Great-grandfather, Nik performed the tightrope walk that killed Karl Wallenda:

I walked out right to where my great grandfather fell and I knelt down, and I looked up and blew him a kiss,

I’m sure that he looked down and kind of gave me a wink, at seven generations, just because we’ve had some tragedy, we’re not going to give up that easily. … I know that he is up there and he’s very, very proud.

5. He Proposed to His Wife While Walking on a Tightrope

In 2007, while walking on a tightrope at 30 feet, Wallenda took the opportunity to propose to his now-wife, Erendira, reports the Seattle Times. Wallenda, along with other members of his family, were performing a tightrope pyramid, when his uncle, Tito, handed him a microphone:

Everybody climbed down, I stayed up on the wire. My girlfriend was in the audience. I walked to the middle of the wire, knelt and asked her to marry me in front of 25,000 people.

Wallenda and Erendira, along with their three children, continue to perform with the Ringling Bros. and Barnum & Bailey. 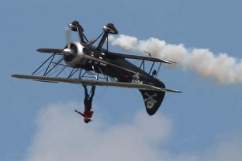 Loading more stories
wpDiscuz
0
0
Would love your thoughts, please comment.x
()
x
| Reply
Nik Wallenda has become the first person to walk across the Grand Canyon on a tightrope. In June 2012, Wallenda walked across Niagra Falls.