Investigators raided Aaron Hernandez’s secret $1,200-a-month apartment in Franklin, Mass. last week. The finds made by the state police at the address could aid the investigation into the murder of 27-year-old Odin Lloyd. Hernandez is charged with the first degree murder of Lloyd and is currently being held without bail.

Here’s what you need you need…

It turns out that the affidavit written for the search warrant cited cocaine as a reason for entry. Massachusetts State Trooper, Michael Bates requested the warrant, stating “the nature of the sale of Cocaine is such that the participants are constantly changing, Cocaine is commonly packaged in small plastic bags which are easily and likely concealed on one’s person(s).”

Although cocaine was the reason the search warrant was signed, there was no further mention of cocaine or illegal substances in any associated documents. This leads to interesting implications with how the authorities have approached this investigation. At some point, prosecutors must have come across information (likely from Ortiz) alleging there be cocaine in Hernandez’s residence. The details surrounding the drugs must have stretched far enough to convince a judge of intent to distribute. Finding evidence for “use and sale of cocaine” is great for prosecutors, because a warrant to search for the good would be a very wide scope. It would allow for police to search for all related items (pipes, bags, money, guns), which could be hidden anywhere in the residence. This gives investigators nearly unlimited access to the apartment. All of its contents, however unrelated they are, could potentially be used towards the investigation.

The information leading the police to the “flophouse” came from Hernandez’s associate, Carlos Ortiz, who has also been arrested and charged with illegally carrying a gun. After his arrest in Connecticut, he cooperated with police, telling them that he had left his cell phone at the flophouse. Ortiz was quickly extradited to Massachusetts to face charges. Ortiz is also alleged to have been one of the three men in Hernandez’s rental car the night of the murder.

Although there isn’t much information on the individual, it has been reported that Hernandez’s barber, Roberto Olivares also helped police find the secret apartment. 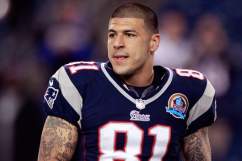 3. The Police Found A Treasure Trove of Potential Evidence

Details surrounding the police findings have been released. Here are some of the things they found in Hernandez’s secret apartment:

-A white hoodie “consistent in color and type with the sweatshirt that Hernandez is observed to be wearing on surveillance cameras the night of the homicide.”
-A red baseball cap worn by Hernandez to a nightclub on the Friday night before the murder. The prosecutors have said that it’s possible Lloyd could have angered Hernandez at the club.
-Five boxes of .45 ammunition (the same caliber of ammunition found on Lloyd’s body), five boxes of rifle ammunition, and one box of .22-caliber ammunition.
-Keys to a brand-new Hummer registered to Hernandez.
-Paychecks from the Patriots and Puma.
-A bag from Kay Jewelers.
-A valet receipt from the W Hotel in Boston.
-A Western Union receipt.
-A Hertz car rental agreement.

4. The Apartment is About 12 Miles From Hernandez’s House

As information from the case grows, we can now see the scale and distance between all of Hernandez’s action and movements. The searched apartment is about 12 miles from the suspect’s house in North Attleboro, Massachusetts. The murder scene took place at the North Attleboro Industrial Park, a mere one mile from Hernandez’s home. The convenience and proximity of the locations are part of why Hernandez was so quickly investigated as a suspect.

5. Police Are Still Looking for Evidence

Despite the number of raids, executed warrants, and material found at the crime scene, police are still searching for more evidence to aid their investigation against the former Patriots tight-end. They are currently asking the public to help them find a missing car mirror related to the case. The driver’s side rear-view mirror from the rented silver Nissan Altima that Hernandez was driving the night of the murder. The Bristol District Attorney Samuel Sutter said the mirror may be anywhere between Odin Lloyd’s home in Boston and Hernandez’s home in North Attleborough. That 30-mile range between the locations include Interstate 95 and various wooded or secluded areas. So, if you’re a local and you find a mirror on the ground, you know who to call.