A Southwest Airlines jet has crash landed at LaGuardia Airport in New York City. The flight was coming from Nashville to LaGuardia.

Standby for more information regarding #Flight345 BNA-LGA. We are gathering details and will post a statement soon.

1. There Are at Least 3 Injuries

Injuries were reported by PIX 11. Several ambulances are rushing to the scene.

According to ABC7, the plane was carrying 143 passengers and five crew members. NY1 is reporting that some passengers on board suffered anxiety attacks whereas other had physical injuries. Five passengers and three flight crew are reported to be injured. 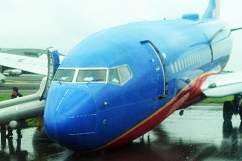 Breaking: Southwest Airlines plane makes rough landing at LaGuardia airportA Southwest Airlines flight arriving into New York's LaGuardia Airport from Nashville experienced a rough landing Monday due to a possible issue with its nosegear. The FAA said in a statement that Southwest Airlines Flight 345 reported possible front landing gear issues before its arrival and its nosegear collapsed upon landing. The agency says no injuries have been reported. MyFoxNY.com reports footage from the scene shows the plane resting on its nose surrounded by emergency vehicles. The FAA says it is investigating. "plane crash" "airplane crash" "laguardia airport" "laguardia airplane crash"2013-07-22T23:09:51.000Z

The plane had no nose gear when it came in for landing. The plane is a Boeing 737. There was no fuel leak detected but firefighters sprayed foam as a precaution. LaGuardia General Manager Thomas Bosco said:

The aircraft veered off and came to rest in a grassy area about halfway down the runway.

Just crash landed in Laguardia airport in NYC!! Thanks be to God that nobody was hurt! Scariest thing… http://t.co/xZ49dZxN0Y

An NTSB investigator will be on scene at LaGuardia this evening to gather more info & assess damage to the Southwest 737.

3. One Runway Has Reopened

#LaGuardia re-opens one runway at 7:05PM for arrivals and departures. Major delays and multiple cancellations expected.

The airport was not accepting flights via instructions from the New York Port Authority in the aftermath of the accident but one runway reopened less than two hours later, reports NY1.

UPDATE: FAA says LaGuardia is NOT closed, but they are not accepting arriving flights. #Flight345

3.5 hrs sitting on the runway w/ this view! LGA Shut Down After Plane Lands Without Nose Gear http://t.co/udGlEjItwE pic.twitter.com/8mQft6YRQW

Planes finally moving at #LGA. Pax must be frustrated; at least they weren’t on #WN345 #Breaking pic.twitter.com/EHfrszCpBS

4. The Flight Originated in Nashville

5. This Comes Just Two Weeks After the Asiana Airlines Crash

This is another aviation accident in the US, just two weeks after the San Francisco plane crash that killed two people on July 6.