It was announced on Monday that Jeff Bezos, the founder of Amazon.com, is set to buy The Washington Post for $250 million, ending the Graham family’s four-generation stewardship of one of America’s leading news organizations. Here’s what you need to know about the proud new owner…

1. Jeff Bezos the Founder of Amazon

Jeff Bezos is the 49-year-old founder and CEO of the online bookstore, Amazon.com, Inc. Bezos led the website to become the largest online retailer and a top model for internet sales.

Amazon founder Jeff Bezos is paying $250 million out of his pocket for the Washington Post | http://t.co/GGrff9tQKH

//platform.twitter.com/widgets.js
Amazon initially raked him in $290 million, but today, his stake is valued at nearly $26 billion.

//platform.twitter.com/widgets.js
Bezos wrote to his soon-to-be employees at The Washington Post on Monday that he did not have a plan for running the paper, except that he expects the company to experiment and reinvent itself. He also said that he won’t lead the newspaper day to day as he does with Amazon.com.

“I am happily living in ‘the other Washington,’ where I have a day job that I love,” Bezos said. “Besides that, The Post already has an excellent leadership team that knows much more about the news business than I do, and I’m extremely grateful to them for agreeing to stay on.”

4. Bezos Dreamed of Space Exploration in His Youth

As a high-school valedictorian in Florida, he dreamed of developing space hotels, amusement parks and colonies for up to 3 million people orbiting the Earth.

“He was not optimistic about what we were doing to our planet, and this was before global warming was a big issue,” his then-girlfriend, Ursula Werner, told The Seattle Times in 2011. “He was also really intrigued by the idea of rocketing into outer space.”

5. He is Known for His Varied Interests

Bezos is known for taking on a variety of interests. The entrepreneur also owns a private aerospace company called Blue Origin, which aims to make space travel more affordable.

One of his more perculiar projects worth mentioning is the 10,000 Year Clock, a massive clock built inside a mountain in West Texas that is designed to run for 10 millennia. Bezos has said the purpose of the 10,000 Year Clock is to encourage people to be less shortsighted and to focus on the long-term.

“If you take the long view,” he told Wired magazine in 2011, “you can solve problems you can’t solve any other way.”

6. He Studied at Princeton University

7. He Worked on Wall Street

After college, Bezos headed to Wall Street and in 1994, he started working for D.E. Shaw, a quantitative hedge fund in New York.

At age 30, he quit his job and moved across the country to start Amazon in a Bellevue rental house. The company went public three years later, and Bezos was instantly worth $290 million.

In 2011, Bezos donated $10 million for an innovation center at Seattle’s Museum of History & Industry, followed by $15 million to his alma mater to establish the Bezos Center for Neural Circuit Dynamics at the Princeton Neuroscience Institute.

Bezos makes few public appearances and carefully guards his privacy. He lives on a Medina waterfront estate with his novelist wife, Mackenzie Bezos, and their four children. 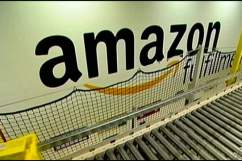 Read More
Amazon, Breaking News, Top 10, Washington
wpDiscuz
0
0
Would love your thoughts, please comment.x
()
x
| Reply
It was announced on Monday that Jeff Bezos, the founder of Amazon.com, is set to buy The Washington Post. Here's what you need to know.