Finally someone asks Anthony Weiner the question the entire world we want to know: “What’s wrong with you?” Of course Mr. Danger dodges the question and spends the entire interview backtracking, at one point Carlos Danger tells O’Donnell to “chillax” and then calls him “dude.” The MSNBC gasbag keeps prodding Weiner, asking straightforward questions and cutting Weiner off when he tries to turn to political rhetoric to get away from the issues. One clear lie that comes out of Weiner’s mouth is when he says: “This can’t be good TV for anyone.” 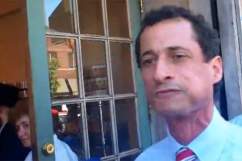 WATCH: Anthony Weiner Blows Lid on Voter: ‘You Are Not My God’

Something that Weiner has specialized throughout this campaign, well certainly since his alter-ego of “Carlos Danger” was made public by the lovely Sydney Leathers, is alienating every potential voter. An odd strategy for someone who is trying to get elected into office.

On September 10 Democratic party members in New York City will go to the polls to chose a nominee to run for mayor in 2013.

Loading more stories
wpDiscuz
0
0
Would love your thoughts, please comment.x
()
x
| Reply
Lawrence O'Donnell asks Weiner the question we all wanted to know the answer to: "What's wrong with you?"