A marijuana grower was nearly decapitated after he accidentally tripped one of his own booby traps that he had strung up to protect his plants, reports the Daily Mail.

Daniel Ricketts was drunkenly driving around his rural Upstate New York property in Berne when he hit a barely visible thin wire on Saturday afternoon. The 50-year-old man was thrown from his Honda Foreman quad bike after hitting the wire, which police said was used as some sort of protection for four large pot plants.

Hikers discovered his dead body nearly decapitated and called the police, who also found barbed wire and a leg trap used to catch coyotes around the plants.

“They go up there and they’ll grow marijuana on a lot of the state lands,” Apple said. “Fortunately hikers, people out and about, neighbors will call us and they’ll tell us.”

Authorities removed the illegal pants and are continuing their investigation into the tragic accident. 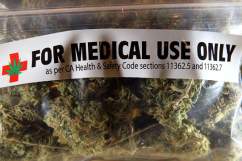 Loading more stories
wpDiscuz
0
0
Would love your thoughts, please comment.x
()
x
| Reply
Daniel Ricketts was driving around his Upstate New York property when he was nearly decapitated after hitting a barely visible thin wire used as a booby trap to protect his plants.