After almost a month of silence, Hannah Anderson, the 16-year-old Amber Alert victim who was kidnapped by family friend James DiMaggio and held for over a week, has returned to her Ask.fm account.

DiMaggio was also accused of killing Hannah’s mother and brother, who were found in his burned down house the day Hannah was discovered missing.

Hannah took to the question-and-answer social media site immediately after her rescue to answer questions regarding kidnapping that she believed the news media was getting “wrong.”

Young Hannah Anderson with her mother. 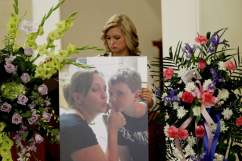 Hannah Anderson Back on Ask.fm, Answering Questions About Kidnapping

Read More
Ask.fm, Breaking News, Hannah Anderson, James DiMaggio
Follow Heavy ↓
Hannah Anderson is back on Ask.fm posting pictures of her and a guy, talking about her murdered family, and answering personal questions.