Tom Piccard, a retired Wheeling police officer, has been named by local sources in West Virginia as the man who opened fire on the federal courthouse in the town on October, injuring several people, reports CBS West Virginia.

1. Piccard Has Been Shot Dead

It’s reported that at around 2:45 p.m. Piccard picked up a position in the parking lot of a Chase bank across the street from the U.S. Federal building and courthouse in Wheeling, West Virginia. Armed with an assault rifle, Piccard “peppered” the buildings with bullets, before turning his attentions to the nearby by YMCA.

A security guard is reported to have been injured by falling glass during the shooting. Piccard was shot dead by US Marshals who were “returning fire” according Police Chief deputy Mike Claxton. 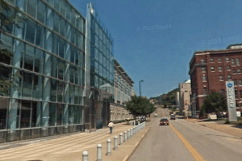 2. Piccard is a Retired Wheeling Cop

It’s reported by local sources that Piccard has been off the job for 15 years but resigned in 2000. Police are still trying to figure out the motive for the shooting.

3. The Department of Homeland Security are Investigating Piccard

According to KDKA, despite the government shutdown, Homeland Security investigators will still be looking into Piccard’s alleged actions.

4. He’s a Native of Wheeling

Piccard was born in Wheeling, the son of Nancy Griffiths and Thomas Piccard. His mother died in 2007, according to the obituary the family are practicing Catholics.

5. A Local Hospital Says That Piccard Injured Two Other People

WTRF reports that three people (possibly including the security guard) were admitted to Wheeling Hospital with injuries relating to the incident.

Read More
5 Fast Facts, Breaking News, Guns, Shooting
Tom Piccard, a retired Wheeling Cop from West Virginia has been named as the suspect who shot at the federal court house in Wheeling.