A gunman reported to have been dressed in camouflage and a bulletproof vest is roaming the campus of Central Connecticut State University, prompting a lockdown that has students cowering in their dorms as SWAT teams hunt for the suspect, reports NBC Connecticut.

The sounds that you just heard was campus police indicating that the campus is ALL CLEAR #ccsu. You may now leave the buildings.

The school posted the emergency through their Twitter account at around noon. Nobody was injured during the ordeal.

1. 3 People Have Been Arrested in Relation to the Lockdown

Police have arrested three people in relation to the lockdown.

“@BreaBenz: This is the first one. Didn't get a picture of the second person. pic.twitter.com/AtGXKHOoNW” THATS DAVE!

Campus PD Chief Chris Cervoni gave little information in the first press conference following the incident. He told reporters that one of those being held in custody was a student, adding that all were of student age. The chief then said that there was no struggle to arrest any of the suspects and that no weapons had been found.

2. The Gunman Was Reported to Have a ‘Big Gun’

Everyone on #CCSU's campus MUST stay indoors and find shelter. This is not a drill!

Reports indicated that gunman was present on campus, armed with a “big gun” and wearing camouflage.. Rob Polansky, a reporter from WFSB, had said that the panic was being treated as an “active shooter situation.” Though an official school spokesperson said maintained it was “not an active shooter” scenario.

Varying accounts suggested that a gunman may be: wearing a mask, armed with two guns, wearing camouflage clothing, heading towards or in James Hall dormitory on the campus. NBC Connecticut reporter Darren Sweeney has tweeted that he spoke to a girl who claims to know the person who is causing the lockdown. She told him “he may have worn his costume to school today all unconfirmed.”

NBC reporter George Colli had said it’s “not a frantic scene,” referring to the area just outside the school.

3. Students Were Told to Shelter-in-Place

The school told students to “Seek shelter. Lock doors, close windows.” One parent told NBC Connecticut’s George Colli that his daughter who was under lockdown, had been told to “draw the blinds” and “not to make any noise.”

Speaking to NBC Connecticut, local Mayor Tim O’Brien did not as to whether or not it was a hostage situation or if anybody had been injured. Just before 2 p.m., police began moving students away from the building at the center of the search, James Hall. 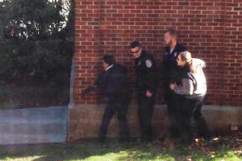 Connecticut School on Lockdown: The Photos You Need to See

A school spokeswoman has said the lockdown is not a “shooting,” reports The Hartford Courant. Streets around the entrance to the campus have been closed.

For hours this was the only thing on the school’s homepage:

4. There Was a Multi-Agency Response

Here's a look at the scene at CCSU in New Britain. pic.twitter.com/umcx8uH7nj

5. Sandy Hook Elementary Principal Dawn Hochsprung Was a Graduate of the School

The school is the alma-mater of Sandy Hook elementary’s slain Principal Dawn Hochsprung. Around 10,000 students attend the school.
The school is located here in New Britain, Connecticut (above).

According to @CCSU classes have been canceled for the rest of the day. #ccsu

Other schools in the area were placed on modified lockdown until the situation was resolved.

Connecticut School on Lockdown: The Photos You Need to See