Here’s what you need to know about the Colts’ newest addition:

1. Adongo Is a Physical Specimen

The 6-foot-6, 247-pound Adongo looks like he was chiseled from stone. In his first attempt at the broad jump, the 24-year-old cleared 11 feet, a mark which would have placed him among the top 10 among participants at the 2013 NFL Combine, according to the Monday Morning Quarterback’s Robert Klemko.

Adongo spent the last three years playing professional rugby in South Africa, most recently for the Eastern Province Kings this summer. He also competed for the Kenyan Under–18 and Under–21 national teams.

3. The Colts Found Adongo Through a Hong Kong Rugby Agent

The Colts discovered Adongo when Johnny Gbenda-Charles, a rugby agent based in Hong Kong, contacted the team.

4. The Colts Hope to Develop Him Into a Pass-Rushing Linebacker

The Colts hope Adongo’s elite size, strength and athleticism can translate from rugby to American football, particularly as a rush linebacker, NFL.com reported on Tuesday.

However, because he lacks experience playing professional football, Adongo isn’t expected to make an immediate impact.

Check out the above video to see Adongo answer questions in Colts training camp.

5. The Colts Just Promoted Him to the Active Roster 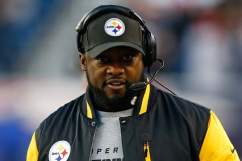 Mike Tomlin Fined $100,000 For Interfering With Play vs. Ravens