An island created by a volcanic eruption in Japan, about 620 miles south of Tokyo, seems to look a lot like cartoon dog hero Snoopy, reports The Guardian. Twitter user @tekken8810 called it a “complete match.” The island had risen from the sea over the past two weeks. 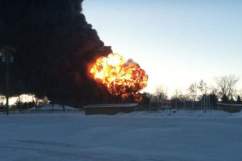 Read More
Breaking News, Japan
The brand-new land mass is located in the Pacific Ocean, about 600 miles south of Tokyo.