Olympic bronze medalist diver Tom Daley made a huge splash this morning. His Youtube video, where he revealed he is dating a man, got half a million views in its first hours online and quickly surged past 1 million. Here is what you need to know about this pioneer in British sporting history.

1. He’s One of Britain’s Most Famous Athletes

With almost 2.5 million Twitter followers, the 19-year-old first gained popularity as a 14-year-old in the Beijing Olympics. He won bronze at the 2012 London games and promises he’ll be back with his peak performance at the Rio Olympics in 2016. Although other British athletes have come out before him, he is regarded as the most popular English athlete to do so. He is also the youngest sportsman to come out in his country. “I think people are going to make a big deal of this,” Daley predicted in his video. After his Twitter post, which contained the link to the confession, he tweeted, “Overwhelmed by all the support! Means the world! Thanks so much guys.”

In his video, he explains that he began a homosexual relationship this spring, which leaves the door open to the possibility of his dating women in the future. “Of course I still fancy girls, but right now I’m dating a guy and couldn’t be happier,” he said.

3. He Released an Autobiography Which Did Not Mention His Sexuality

In 2012, Daley wrote My Story, where he talks about the pressures he faces as a young Olympian. Although he mentions being the face of the Olympics, host of British television show Splash, and coping with his father’s death, he never deals with the issue of sexuality in his first official memoir.

4. He Was Voted the World’s Sexiest Man by a Gay Magazine

Attitude, Europe’s best-selling gay magazine, bestowed him this honor last year in their annual poll. Daley said that some people encouraged him to come out through a magazine cover or TV interview, but he took a newer approach. “I don’t want to get my words twisted. I wanted to put an end to all the rumors…”

In his video, Daley said that his father, Rob, who died at age 40, always said to him, “As long as you are happy, I’m happy.” The day before he came out, Daley Instagramed a photo of him and his mom with the caption, “So lucky to have such a supportive mum! I love you!” 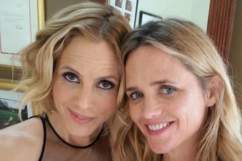 Maria Bello Comes Out of the Closet as Lesbian

Read More
5 Fast Facts, Diving, LGBT, Olympics, Youtube
Follow Heavy ↓
The Olympic diver told the world today he is in a gay relationship -- making him the most popular English athlete ever to come out.