While both teams boasted impressive resumes coming into Monday night’s showdown, the Seminoles’ and Tigers’ respective roads to the championship couldn’t have been more different.

With a stingy defense and high-octane offense led by Heisman Trophy-winning freshman phenom Jameis Winston, Florida State earned its spot in the always-controversial BCS title game through sheer domination. With an average margin of victory of 42.3 points this season, Jimbo Fisher’s team cruised to a 13-0 record virtually untested.

Meanwhile, Gus Malzahn’s team needed the unlikeliest of scenarios to earn the chance to play Florida State in this highly anticipated clash of heavyweight programs. Auburn capitalized on two incredible last-minute touchdowns in back-to-back games against Georgia and Alabama to advance to the SEC Championship, where a 59-42 win over Missouri propelled it to a BCS national title berth.

It was Team Dominance vs. Team Destiny — and it was an absolute thriller.

Find a complete breakdown of the BCS National Championship between Auburn and Florida State below, including the best highlights from Monday’s instant classic.

Nine-time Grammy Award winner John Legend opened things up in Pasadena with a beautiful rendition of the national anthem. You could sense a great deal of nervousness and tension on both sides, but the players did their best to look stoic during a well-received anthem that ended with fireworks and exuberant cheers from the crowd.

The captains from both teams shook hands and introduced themselves prior to the coin flip. Florida State won the toss after it landed on the Seminoles logo. Jimbo Fisher’s team chose to defer and receive the second-half kickoff.

After Auburn punted on its first drive, Florida State turned its first possession into points. An eight-play, 59-yard drive resulted in a 35-yard Robert Aguayo field goal and a 3-0 Seminoles lead with 9:53 remaining in the first quarter.

Auburn capitalized on great field position and scored the game’s first touchdown on a Keith Marshall 12-yard touchdown pass to Tre Mason. The Tigers caught the Seminoles in a blitz and set up a well-designed screen play to Mason, who easily galloped into the end zone to give his team a 7-3 lead with 3:07 remaining in the first quarter.

Auburn put Florida State in an unfamiliar position early in the first half — facing a deficit. The Tigers took a 14-3 lead over the Seminoles on a 50-yard touchdown pass from Nick Marshall to Melvin Ray with 13:48 remaining in the second quarter. The Seminoles linebackers were caught napping, allowing Ray to break free behind the coverage for the easy pitch and catch.

Watch the score below:

Keith Marshall and the Auburn offense forced a Jameis Winston fumble and took advantage of a tired Florida State defense to make it a 21-3 game. The Tigers capped off a six-play, 27-yard drive with a four-yard Marshall touchdown run with 5:01 left in the second quarter.

At this point, bookmakers had the Seminoles at 3-to-1 odds to win.

The Seminoles finally came to life after converting a fake punt on fourth-and-four from their own 40-yard line. Devonta Freeman’s three-yard touchdown run capped off an 11-play, 66-yard drive, trimming the Auburn lead to 21-10.

Auburn took an 11-point lead into halftime, a score that most people certainly didn’t expect after two quarters. Florida State, however, received the second-half kickoff and had an opportunity to pull within one score after the break.

The Seminoles received the kickoff to start the second half, but failed to move the ball at all. Jimbo Fisher’s team was forced to punt it back to Auburn after a three-and-out.

The Tigers, however, couldn’t generate any points with their opening second-half possession either. A crucial third-down holding penalty on tackle Greg Robinson negated a first-down catch deep in Seminoles territory and forced Gus Malzahn’s team to punt.

Florida State Makes It a One Possession Game

The Seminoles moved the ball 67 yards in 10 plays on their second possession of the third quarter, but the drive stalled at the Tigers 24-yard line. Florida State settled for a Roberto Aguayo 41-yard field goal, but made it 10 unanswered points cut the Auburn lead to 21-13 with 6:05 remaining in the third.

Florida State cornerback P.J. Williams picked off Keith Marshall and returned it to the Seminoles 44-yard line before coughing up the football. Fortunately, fellow defensive back Lamarcus Joyner was there to cover it up and give Jameis Winston and the offense favorable field position.

This year’s Heisman Trophy winner capitalized on the mistake and connected with fullback Chad Abram for an 11-yard score with 10:55 left in the final quarter. However, a 15-yard unsportsmanlike conduct penalty on Devonta Freeman forced Jimbo Fisher to kick the extra point instead of attempting to tie the game with a two-point conversion.

Florida State had scored 17 straight points to pull within 21-20.

Feeling the pressure, Auburn was able to get into some rhythm on offense following Marshall’s interception. The Tigers capped off a 12-play, 69-yard drive with a Cody Parkey 22-yard field goal. The Florida State defense made an important stand on third down with Auburn on their six-yard line. Tigers led 24-20.

In improbable fashion, Florida State came from 18 points down to take the lead late in the game. It happened when Levonte Whitfield took Cody Parkey’s kick back 100 yards for a touchdown to give the Seminoles a 27-24 lead with 4:31 remaining in regulation. What a thriller! 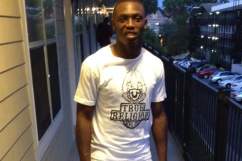 Back and forth it went. Auburn responded to Florida State’s kickoff return with an eight-play, 75-yard drive capped off by a 37-yard Tre Mason touchdown with 1:19 to go. Mason finished the game with 34 carries for 195 yards and a touchdown.

Five plays after a 49-yard catch and run by Rashad Greene set Florida State up at the Auburn 23-yard line, Tigers cornerback Chris Davis committed a critical third-down pass interference penalty (see GIF below) that gave the Seminoles a first-and-goal from the two-yard line. On the very next play, Winston found Kelvin Benjamin for the go-ahead touchdown with 13 seconds remaining.

Auburn needed one more stroke of late-game magic to come back and snatch victory from the jaws of defeat. But there would be no such fairy dust for the Tigers.

Watch the game-winning score below:

The Florida State Seminoles capped off one of the most dominant seasons in college football history with a thrilling 34-31 victory over the Auburn Tigers in the 2014 BCS National Championship. 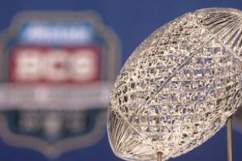 BCS Championship Game Photos: The Pictures You Need to See

Loading more stories
wpDiscuz
0
0
Would love your thoughts, please comment.x
()
x
| Reply
Florida State capped off a historic season with a thrilling 34-31 victory over Auburn in the 2014 BCS National Championship. Look inside for complete coverage.