The Mayor of Jackson, Mississippi, Chokwe Lumumba has died at age of 66, reports Mississippi News Now. The later mayor died at the city of Jackson’s St. Dominic’s Hospital. The cause of death is reported to be heart failure, according to The Clarion-Ledger.

WLBT reports that Lumumba was admitted to St. Dominic’s with chest pains early on February 25.

Early reports suggest that Frank Bluntson, the President of City Council, will become the mayor of Jackson.

1. Lumumba Had Been ‘Sick’ Lately

Jackson Councilwoman Margaret Barrett-Simon told The Clarion Ledger, “All I can say is the mayor is gone, [he] has been sick, he’s looked well recently. He’s been here with bells on.”

Jackson Councilman Quentin Whitwell said, “There were all kinds of complications going on, but ultimately it was heart failure. We’re just all stricken with grief.”

2. He Battled Prostate Cancer in the Past

Lumumba speaking at the Mississippi State Senate on January 30. (Facebook)

Lumumba, a renowned lawyer, withdrew from defending a murder suspect in a trial citing health issues in July 2013, reported Mississippi News Now in 2013. While justifying his actions, Lumumba admitted in an interview that he had battled prostate cancer in the in 1999 and 2000.

The man he was representing, Archie Quinn, was accused of murdering a woman and injuring a man during a home invasion. The mayor pulled out of defending Quinn just three days beforehand.

Lumumba’s office released an official statement to the press:

Mayor Lumumba is healthy and while he dispelled any questions or concerns regarding his health, he, as anyone, has routine medical examinations, check-ups and consultations which are private. There is nothing that was stated during the Archie Quinn case that would indicate that he is nothing short of healthy and fit to serve the people of Jackson.

3. Lumumba Was Mayor For Less Than a Year

He was elected mayor of Jackson on June 4, 2013. During the election, Lumumba won a staggering 86 percent of the vote to defeat candidates, Francis P. Smith, Richard C. Williams and Cornelius Griggs.

In a September 2013 profile, Al-Jazeera American called him, “America’s most revolutionary mayor.” At his inauguration, Lumumba told his passionate supporters, “God is good, all the time.”

On the sad news of the passing of Jackson Mayor Chokwe Lumumba, our prayers go out to his family.

During his election campaign, his rival Jonathan Lee, portrayed Lumumba as a radical who was out-of-touch.

4. As a Famed Lawyer He Once Represented 2Pac

He was a native of Detroit, Michigan. The sone of Lucien and Priscilla Francis Taliaferro. Lumumba was the second of eight children. He referred to his birth name, Edwin Finley Taliaferro, as his “slave name.” His new name was based on the Chokwe ethnic group of Central Africa and their leader Patrice Lumumba.

He’s survived by his two children. In 2003, his wife, Nubia, an air hostess, died. The family moved to Jackson in the late 1980s and lived in a middle class neighborhood in the city.

In addition to his legal career, he was the co-founder of the Malcolm X Grassroots Movement, a group that encourages self-determination among African Americans.

He had “shunned” formal politics until 2009 when he successfully ran for City Council in 2009. Fittingly, he won his election on May 19, Malcolm X’s birthday.

His career in politics and activism began the day after Martin Luther King JR was assassinated. It was an event that had a deep affect on Lumumba. The day after the murder, he, along with other students, occupied a university building at Western Michigan University in protest against the lack of African-American faculty members. 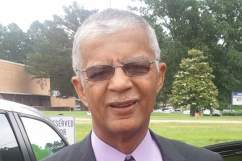 5. His Most Famous Case Was That of the Scott Sisters

Lumumba worked on many famous cases, such as the release of the Scott Sisters, Jamie and Gladys, who had been imprisoned for 16 years for an eleven dollar robbery they committed in 1993 in Forest, Mississippi.

Their release was orchestrated in 2010 when Governor Haley Barbour signed their release from prison. Neither was pardoned, nor where the sentences commuted. Jamie Scott was suffering from kidney failure and in need of dialysis. Their release was based on the condition that Gladys donate an organ to her sister. The case is among the most controversial in Mississippi history.