Maxence Parrot comes into the Sochi Olympics a relative unknown. Only qualifying for the games within the last month, Parrot is the third most prominent Canadian Slopestyle snowboarder behind Mark McMorris and Sebastian Toutant. But on Thursday morning, the 20-year-old Parrot posted the highest score in the Slopestyle qualifiers, announcing himself as a serious medal contender. Here’s what you should know about this cocky underdog and his journey to Sochi:

1. He Turned Down Funding to Train His Own Way

The Globe and Mail wrote a profile of Parrot, shortly before he qualified for the Olympics, which focused on the unusually independent route he was taking to Sochi.

Last year, Canada Snowboard invited Parrot to join the Canadian national team, and to thereby have his training organized and funded. Parrot turned them down, preferring to stick to his own schedule, his own gym regime. He told the Globe and Mail:

I wanted to do my own thing. Everything went super good last year, and I didn’t want to change my program. It’s not that their program is not good, I just like to do my own things. I’m a guy with a lot of determination and motivation.

Instead, Parrot funded his quest by borrowing $20,000 from his parents to cover travel and entry fees. With the past year’s contest winnings, he’s been able to pay them back in full.

2. He Dropped Out of High-School to Board Full-Time

When Parrot was 9 years old, a close friend received a snowboard for Christmas. Young Max was consumed by envious longing, but his parents were reluctant to give him a board of his own, worried that the insurgent new alpine sport was more dangerous than skiing. Max spent the next summer mowing all the lawns in his neighborhood to save up enough money to buy his own board.

Parrot has displayed the single-minded focus and commitment to snowboarding ever since. He dropped out of high school to make his name on the contest scene. Fellow Canadian snowboarder Sebastian Toutant told the Globe and Mail that Parrot treated the circuit like an academy, saying, “He felt like he was at school. He’s been working like he should. Having the federation or no, they’re going to send the best riders to the Olympics.”

At 16, Parrot took third place at the Ride Shakedown in Montreal, Quebec, a finish that marked him as a contender in professional snowboarding.

3. He Landed the First ‘Triple Cork’ in Slopestyle History

According to the bio on Parrot’s Squarespace, he landed the first triple cork in Slopestyle history at the 2013 6 Star O’Neill Evolution in Switzerland, where he took gold.

A triple cork is basically what it sounds like, a jump where the snowboarder turns three times mid-air in a kind of corkscrew rotation. For a visual example, click on the video above and watch Parrot land his triple corkscrew at around the 1:07 mark.

Slopestyle will receive its Olympics premiere in Sochi, after becoming a staple of the Winter X Games. The goal of the event is to perform the most difficult tricks while reaching the highest altitude off of jumps, as you make your way down a specially customized slope course.

4. He Trolled Shaun White for Not Competing in Slopestyle

American snowboard legend Shaun White dropped out of the Slopestyle competition one day before it began, after sustaining minor injuries on a course some riders have called unduly harsh. White released a statement, saying:

“With the practice runs I have taken, even after course modifications and watching fellow athletes get hurt, the potential risk of injury is a bit too much for me to gamble my other Olympics goals on.”

Parrot tweeted in response that White was only dropping because he knew he “wouldn’t be able to win,” and that White was “scared.” He later deleted those tweets and issued this half-apology:

Shaun White has been the face of professional snowboarding for years now, and his withdrawal threatens to take away some of the event’s cache, on the night of its Olympic premiere. White told a press conference that to him, the half-pipe still reigns supreme:

“For me, I definitely feel the halfpipe carries a bit more weight, a bit more pressure. I guess that’s fair enough to say.”

5. He Is One of the Only Boarders Riding Without a Sponsor

As a kid, Parrot’s dream had been to earn the sponsorship of his local snowboard shop. He secured that when he was in his teens. But he’ll be taking the slopes Saturday night on a Burton board he paid for himself. When asked about his decision, Parrot replied:

“I’m not going to go for a bad contract. I know I’m going to blow up.” 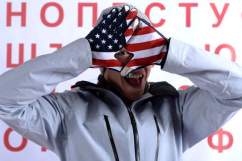 Read More
Breaking News, Sochi Olympics
Maxence Parrot is a Canadian snowboarder who posted the highest score in the Slopestyle qualifiers. Here's what you should know about this cocky underdog and his journey to Sochi.