Rosalind Groenewoud (pronounced Groon-e-wowed) is a Canadian freeskier who put up the highest score ever recorded in women’s halfpipe at the 2012 X Games. Today, she’s the odds-on favorite to take gold in the first-ever Olympic women’s halfpipe skiing event, held at Sochi.

Here’s what you need to know about the skier who friends call Roz G:

1. She Will Be Dedicating Her Run to the Memory of Sarah Burke

A profile of Groenewoud in the Globe and Mail emphasizes how integral deceased Canadian freeskier Sarah Burke was to Groenewoud’s own development.

Burke, who died in 2012 in a training accident, at age 29, was a pioneer in women’s superpipe. As a teenage moguls skier, she would sneak out to the snowboard halfpipes, where she began teaching herself the tricks that would later bring her 4 X-Games gold medals. It is a product of Burke’s advocacy on behalf of the sport, that halfpipe skiing is for the first time an Olympic event at Sochi.

Groenewoude first met Burke at a skiing summer camp. Burke, seven years Rosalind’s senior, worked as a coach at the camp. The Globe and Mail writes that the relationship between the women deepened over the years ” as Burke became a mentor, a confidante, a teammate and a close friend. Burke pushed Groenewoud, and their sport, ahead.”

It was shortly after Burke’s death, when Groenewoude was still grieving, that she took to the halfpipe at the 2012 X Games, Burke’s name pasted to the front of her helmet. Groenewoud shot up four meters above the pipe on her first hit and secured the highest score in the history of women’s halfpipe skiing.

Groenewoude told the Globe and Mail:

“It’s impossible to separate my ski career now from both Sarah and Sarah’s passing.”

She went on to say that her friend’s death still wasn’t fully real to her until a visit to the 2012 Olympics in London, in August of 2012. She said that walking through that carnival of athleticism, nationalism and commerce, “was the first time I really dealt with the fact Sarah wasn’t going to be in Sochi. It was the month, I guess, I fully stopped being in denial.”

Groenewoud told TSN in the days leading up to her first X Games triumph:

“All the girls are really pushing themselves,” she said. “I think that we all realize that the best way to honour Sarah is for all of us to keep pushing ourselves and to progress women’s skiing and fight for more inclusion in events.”

CBC reported in December of last year that Groenwoude was undergoing arthroscopic surgery on both knees, after suffering an injury in training for the Dew Tour. She told CBC: “It wasn’t my plan to have knee surgery this close to the Olympics. I can’t wait to have two fully functional knees and ski without pain.”

In January, Groenewoud took silver at the 2014 X Games, dispelling fears that she wouldn’t be in competitive shape for Sochi.

3. She Stopped Skiing for 10 Years When Her Family Moved to Ecuador

The Globe and Mail describes Groenewoude as striving to defy gravity from the time she was a toddler, when she begged her parents to purchase her a mini-trampoline. Her father remembers her spending “hundreds and hundreds” of hours on it, going on to say, “She liked being upside down, being swung around. It’s the same thing she does now. It all makes sense when you look back.”

The Groenewouds encouraged their children to be active, mandating three physical activities a day before allowing them to watch television. Groenewoud grew up playing piano, classical and jazz flute. She first put on skis at 3 years old, but when her father’s work as a geophysicist took the family to Ecuador, she took a decade long break from winter sports.

When she returned to Calgary she reacquainted herself with the slope, and kept active in summer months by founding a pole vault team at her high school.

Along with Sarah Burke, Grounewoud helped found the first unofficial national ski halfpipe team, which later acquired the blessing, and funding of the Canadian government.

4. She Is Part of Target’s ‘Action Sports’ Team

Target opened its first Canadian store in March of 2013. In advance of that opening, the retail chain added Groenewoud to its roster of “elite action sports athletes” who compete with their sponsorship. Grounewoud had received an offer from Red Bull but did not feel comfortable representing the company, as she doesn’t imbibe energy drinks. In the official press release, Groenewoud said she signed on with Target because she really admired the company’s “commitment to giving, especially their focus on supporting schools.”

5. She’s Unfazed By Her Sport’s Danger

On Sunday, February 16, British freeskier Rowan Chesire was knocked unconscious after falling during a training session for Thursday’s halfpipe competition. Chesire lay unconscious in the snow for seven minutes before coming to. It was later confirmed that she suffered a concussion and will not be competing again at Sochi.

One possible lesson Groenwoude could have taken from the death of her mentor was that their chosen sport was simply too dangerous. Yes, halfpipe skiing had brought Sarah into her life, but it also removed Sarah from the planet.

Still, Groenewoud says the memory of her mentor drives her. Her mother, Shane Matthews, assured the Globe and Mail, “It’s risky but they work really hard at managing risks. They’re not crazy thrill-seekers.”

Many Canadian admirers will nonetheless be seeking the thrill of watching Grounewoud compete Thursday. 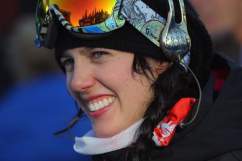 Loading more stories
wpDiscuz
0
0
Would love your thoughts, please comment.x
()
x
| Reply
Rosalind Groenewoud, is the Canadian half-pipe skier who's favored to take gold in Sochi on Thursday. Here's what you need to know about Roz G.