Lizzy Yarnold is a British skeleton racer competing in the 2014 Winter Olympics in Sochi, Russia. She won the gold medal as the odds-on favorite in Friday’s skeleton final.

Here’s what you need to know about the pride of Kent.

Click here for full results of the women’s skeleton event.

2. She Loves Knitting, The Archers and Downton Abbey

According to the Telegraph, Yarnold was taught how to knit by her grandmother. Although she hasn’t been doing any knitting in Sochi, she has been tuning into some British TV dramas.

She told the Telegraph:

I’ve been relaxing by watching ‘Mr Selfridge’ and a bit of ’Downton Abbey’. It’s really important to have that total chill-out time.”

3. Her Fans are Known as the ‘Yarny Army’

Yarnold has the backing of a group of supporters dubbed the “Yarny Army.” The British newspaper The Guardian describes her loyal followers as “a typically British supporting cast of family and friends who had journeyed from West Kingsdown in Kent sporting union jacks and customised T-shirts.”

Yarnold is the defending world champion in skeleton.

5. She Grew Up Playing a Number of Sports

According to her website, Yarnold grew up playing a number of sports before finding skeleton, including high-board diving, horseback riding and netball. 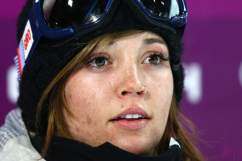