Today’s Google Doodle honored Dorothy Irene Height, commemorating what would have been the civil rights leader’s 102nd birthday. She spent 80 years of her life helping African Americans with their struggles for equality. Here’s what you should know about her.

1. She Was the President of the National Council of Negro Women

They also honored her on what would be her 102nd birthday.
Their website’s main page had this message:

March is Women’s History Month, and there is no better opportunity than today to honor one of our own by commemorating the birthday of the late Dr. Dorothy Irene Height. Today, we proudly celebrate the life and legacy of Dr. Dorothy I. Height, the National Council of Negro Women’s (NCNW) fourth National President.

She served as president of the organization from 1957 to 1997. In this position, she worked with Martin Luther King Jr., A. Philip Randolph, Roy Wilkins, Whitney Young, John Lewis and James Farmer. Those leaders are called the “Big Six” of the Civil Rights Movement.

2. She Was Kicked Out of Barnard Because She Was Black

According to biography.com, she was accepted into the New York City-based college, but right before the semester began, they told her that they’d already filled their black student quota.

This forced her to apply to New York University. There, she earned two degrees, a bachelor’s degree in education in 1930 and a master’s degree in psychology in 1932.

In her memoir Open Wide the Freedom Gates, she chronicled her inspirational life. One of her quotes from the book was:

I am the product of many whose lives have touched mine, from the famous, distinguished, and powerful to the little known and the poor.

Honoring Dorothy Height! Another GIANT in our history! Learning so we can teach! #SALUTE http://t.co/PvieANxeUs pic.twitter.com/LJa14Ataa2

3. She Won the Presidential Medal of Freedom & the Congressional Gold Medal

She died at 98 and when she passed, the New York Times said:

Ms. Height is widely credited as the first person in the modern civil rights era to treat the problems of equality for women and equality for African-Americans as a seamless whole, merging concerns that had been largely historically separate.

4. She Stood Next to Martin Luther King During His ‘I Have a Dream’ Speech

She met M.L.K. when he was only 15 years old. In 1963, she supported him during his famous address.
According to biography.com, “despite her skills as a speaker and a leader, Height was not invited to talk that day.”

She also organized “Wednesdays in Mississippi”, bringing together black and white women from both the North and South to open the lines of communication.

5. Obama Called Her ‘The Godmother of the Civil Rights Movement’

In 2009, she sat at the dais as he was sworn in as the 44th president.
The Washington Post reported that when she died, Obama said she, “devoted her life to those struggling for equality . . . witnessing every march and milestone along the way.” 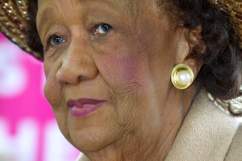 Loading more stories
wpDiscuz
0
0
Would love your thoughts, please comment.x
()
x
| Reply
Civil Rights leader Dorothy Irene Height is honored with a Google Doodle today to commemorate what would have been her 102nd birthday.