Courtney Cash, 23, the great-niece of Johnny Cash, was found dead outside of her home in Baxter, Tennessee, stabbed and stuffed in a small box, reports WSMV. Cops have arrested a friend of hers and charged him with the murder in Putnam County, about 80 miles east of Nashville.

1. Her Grandfather is Johnny Cash’s Brother

She’s the granddaughter of Tommy Cash, Johnny’s little brother. Tommy, 73, is a country star in his own right. He’s also a licensed realtor in Tennessee. When his brother died in 2003, Tommy Cash was the listing agent for Johnny Cash’s home. He released a statement on the death of his granddaughter:

We ask for your prayers for the Cash family at this time. Courtney and her boyfriend are beloved members of my family and like you we have a lot of questions and emotions that we are beginning to sort through today. We ask for you to respect our privacy and appreciate all the support that the public and media has always offered my family, as we handle the loss of my granddaughter, pray for the father of my great-grand child and journey through the search for justice on this violent act. We are completely heartbroken. It is a time like this that we are grateful for our faith and trusting the loving guidance of God.

2. Her Body Was Found Stuffed in a Small Box

Courtney Cash was found in a 4-by-2 box just outside of her house, at 8129 Rice Road in Baxter, by cops early on the morning of March 19. The box was described by WKRN as “similar to a cedar chest but not cedar.”

3. Her Boyfriend Saved Their Daughter’s Life

Police are operating on the understanding that Courtney Cash and her baby’s father, Austin Johnson, were stabbed by a friend who was staying in their home. Johnson escaped the home with the couple’s 20-month-old little girl. The toddler was not hurt in the attack. Austin Johnson is being treated at Vanderbilt University Medical Center, his injuries have prevented him from giving a statement, reports WKRN. 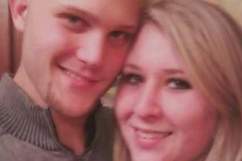 4. Cops Have Charged One of Her Friends With the Murder

Wayne Masciarella is charged in relation to the murder. (Facebook)

Her friend, Wayne Masciarella, 27, has been charged with first-degree murder in relation to the crime. According to WKRN, Masciarella has a long criminal past. He has spent time in the Putnam County Jail on 20 occasions. His rap sheet includes charges for aggravated assault, possession and public intoxication, reports News Channel 5.

The three are believed to have been out partying on the night of the incident and then gotten into a fight upon returning home. Additional charges are pending in the case and Masciarella is being held without bond. He is due to face a judge on April 21.

5. Her Murder May Be Drug Related

The attack may have been drug related, according to local Sheriff David Andrews. Sheriff Andrews told the media:

We live in a drug-driven society. This is a senseless, tragic death of a young lady whose life was probably taken as a direct or indirect result of drugs.

According to her Facebook page, Courtney is “self-employed” and is a graduate of Nashville State Technical CC. At one point she lived in Delray Beach, Florida.