Police have identified 16-year-old Alex Hribal as the suspect in a mass stabbing on April 9 at Franklin Regional High School in Murrysville, Pennsylvania.

Twenty-two people were stabbed in the attack, including 21 students. Eventually, police say, Hribal was wrestled to the ground by the school’s assistant principal, Sam King, and a security guard known as “Sarge.”

I was in the school, and I came down the stairs, and I saw the kid. Mr. (Sam) King was yelling at him, and I didn’t know why. I saw him stab Sarge, the officer. We both jumped on top of him (suspect) and immobilized him.

Here’s what you need to know about Hribal:

1. He Wielded Two 8-to-10-Inch Knives; One Victim Is on Life Support

The suspect was tackled by number of people including senior Ian Griffith shown here. (Twitter)

The attack occurred in a crowded hallway just before school started.

CBS Pittsburgh reported that Hribal tackled a freshman student and stabbed him in the stomach before running down the hall, slashing other students while wielding two 8-to-10-inch knives.

Two of the students who were taken to Forbes Hospital in Monroeville were listed as being in critical but stable condition, reports WTAE. Dr. Mark Rubino explained the nature of the injuries to the media:

They seem to actually almost have a pattern. Most of them were to the right lower abdomen and the right flank, and that created some of the criticality of their wounds and the nature of their injuries.

At UPMC Presbyterian in Pittsburgh a 17-year-old was treated for life-threatening wounds after suffering injuries to his liver and diaphragm. He is on life support in intensive care. The knife wound he suffered came within inches of his heart.

Sarge has been discharged. 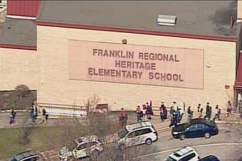 2. Police Have Not Identified Hribal’s Motive

According to CBS Pittsburgh, police are looking into the possibility that there was a threatening phone call between Hribal and another student the night before the attack. A freshman at Franklin Regional, freshman Hope Demont, told The Pittsburgh Post-Gazette that Hribal allegedly called an upperclassman the night before and said: “I’m going to f*** you up.” The paper further reports that the call was made from a protected number.

The Pittsburgh Post-Gazette quotes a student telling them that Hribal was “sort of nerdy, short. I would assume that he was bullied and there was a good amount of depression.” NBC News reports that when Hribal was taken into custody he told officers that he wanted to die.

After being taken into custody, The Gazette says that he was taken to Westmoreland Hospital for minor injuries. He was then brought to Murrysville police station for questioning. Later, he stood before District Judge Charles Conway in Export, Pennsylvania, where it was determined that he would be tried as an adult. Hribal will face four counts of attempted murder and 21 counts of aggravated assault. He was denied bail with District Attorney John Peck telling the court he believed Hribal was a threat to the community.

Hribal being picked up by cops after falling over while being brought into custody. (KDKA)

The boy’s defense attorney, Patrick Thomassey, has requested a psychiatric evaluation to see if Hribal is fit to stand trial. Thomassey told Good Morning America that Hribal was “confused, scared and depressed.” He added:

I think he understands what he did but not the gravity of the situation or how severely people are injured. His parents are devastated and send their condolences to everybody involved.

His father, Harold Hribal spoke briefly to the media outside of his home simply saying:

My prayers go out to everyone who was injured today and I hope they recover as quickly as possible.

#BREAKING: FBI is on scene, and has seized 16 yr old Alex Hribal's computer from his home. #FranklinRegional pic.twitter.com/JD5QEBNyqy

Later Williams also tweeted that the FBI were on scene at Hribal’s home where the suspect’s computer was seized.

His Facebook page is adorned with a picture of Kurt Cobain, who committed suicide nearly exactly 20 years ago. The social media profile includes a reference to Hitler.

4. A Classmate Said He Came From a ‘Good Family’

Some of the suspect’s classmates have said that he is a neighbor of Sam King, the assistant principal who tackled him. One student told Fox News that the suspect came from a “good family.” A source told Heavy that his family has address in Sunflower Court in Murrysville (shown above). We found a Tina Hribal who lives there and acts as the assistant secretary/treasurer for the community. There is a Samuel King listed as living in the same community.

One student told The Pittsburgh Post Gazette that he was “shocked, surprised… I know him pretty well. I’ve never seen any anger from him, ever.” Another called Hribal a “sort of a shy person. To me he never seemed like someone who would do anything violent. He never seems very upset or anything like that.” Neighbors of the family are in shock at the events in Franklin Regional. Most of the residents of Sunflower Court have kids in the Franklin school system. A neighbor of the Hribal’s, Lori Renda, told CBS Pittsburgh, “I have no idea what could have cause it.” Another, Terri Ledonne, said “We’ve known them since we moved in. It’s…it’s tragic.”

5. A Source Says Hribal Had Made ‘Death Threats’

According to the brother of a sophomore at Franklin Regional, “It was a pretty common knowledge between all the kids that he had made some death threats.” The brother, speaking to ABC News, added, “I guess the kids who got the threats just assumed it’s no big deal.”