Simon Ostrovsky, an intrepid investigative reporter for Vice News, was abducted and taken into custody on Monday, April 21, by pro-Russian forces in Eastern Ukraine. On Thursday April 24, it was announced that he had been released and was in the care of other international reporters. Ostrovsky has been covering the unfolding situation in Ukraine for months in a multi-part series called “Russian Roulette.”

1. News of His Abduction Emerged Via the Mayor of Slavyansk

The mayor of Slavyansk & his press sec have confirmed @SimonOstrovsky is in custody in Slavyansk. I was at the presser.

According Roland Oliphant, a Telegraph journalist in Ukraine, the mayor of the Eastern Ukrainian city of Slavyansk confirmed that Ostrovsky was in custody. The Moscow Times, an English-language Russian publication, reported that the Pro-Russian “separatists” who had taken over the city’s administration were holding the journalist. He was reportedly abducted by gunman on Monday.

His last postings on Twitter came on Monday morning when he was covering a press conference being hosted by the separatist mayor.

News emerged of his release on Thursday April 24 via CBC journalist J-Francois Belanger who reportedly picked up Ostrovsky and brought him back to Donetsk.

Breaking: hostage @SimonOstrovsky is free and safe. He is with us in CBC car en route to Donetsk @CBCNews @CBCAlerts pic.twitter.com/9uSyr81zDD

Ostrovsky, although born in Russia, has duel citizenship with the United States and Israel, but has been reporting on Russia for years, at one point serving as a reporter for The Moscow Times. Some commenters on articles about Ostrovsky’s abduction imply that he was abducted not only for his fearless questioning, but over his Israeli citizenship.

3. He’s Had a Number of Close Encounters While Reporting From Eastern Ukraine

Since the Russian occupation of Crimea, Ostrovsky has been on the ground, speaking with soldiers and often asking hard questions to men with guns. On a number of occasions, Ostrovsky had tense close encounters with the Russian army in Crimea, and now pro-Russian “separatists” who have been talking control of Eastern Ukrainian cities. Some of his encounters got so tense, and the threat of violence so palpable, that it got the attention of the mainstream media.

You can watch some of Ostrovsky’s reporting from Eastern Ukraine above.

4. He Has Also Reported on North Korea & Israel

With Vice, Ostrovsky has hosted, produced and directed a number of investigative documentaries about international issues, including the video above in which he traveled with Vice co-founder Shane Smith to North Korean labor prison camps in Siberia. Ostrovksy has also reported extensively on Israel, including a recent documentary about the Israeli eviction of Arab Bedouins.

We are aware of @SimonOstrovsky's situation and are working to ensure the safety and security of our friend and colleague.

VICE News is aware of the situation and is in contact with the US State Department and other appropriate government authorities to secure the safety and security of our friend and colleague, Simon Ostrovsky.

VICE News is delighted to confirm that our colleague and friend Simon Ostrovsky has been safely released and is in good health. We would like to thank everyone for their support during this difficult time. Out of respect for Simon and his family’s privacy, we have no further statement at this time. 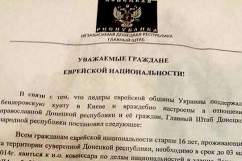 Loading more stories
wpDiscuz
0
0
Would love your thoughts, please comment.x
()
x
| Reply
Simon Ostrovsky is Vice News' reporter who was abducted by pro-Russian forces in Eastern Ukraine. Here is what you need to know about this intrepid journalist.