Protests across the American west are calling for Mexico to release 25-year-old American Andrew Tahmooressi. Tahmooressi, a Marine reservist who served in Afghanistan, is imprisoned in La Mesa prison in Tijuana after he was pulled over on March 31 with a number of guns in his car.

Here’s what you need to know about Tahmooressi, the incident, and the backlash it caused:

On March 31, the South Florida native was driving to a friend’s house near San Diego when he says he missed his exit and crossed the US-Mexico border with multiple legally purchased U.S. guns in his car, reports CBS. He was reportedly carrying the guns in his car because he has been living out of his car and all of his possessions were in the truck at the time of crossing.

Tahmooressi was arrested with the guns and taken to infamous La Mesa prison.

2. He Is Imprisoned & Being Held on 3 Gun Charges

Tahmooressi, who awaits trial for three gun charges, has described his time in prison as bleak. After an escape attempt, Tahmooressi was chained by all four limbs. In another instance, he reportedly stabbed himself in the neck with a broken light bulb.

CBS Miami reports that one evening Tahmooressi called his mother in a panic and said:

Mom I’m not going to make it through the night. There’s hit men in here, they have told me they are going to kill me. They’re going to rape and then torture and murder me and they’re going to send me out in a body bag.

FOX reports that he is ineligible for jail because 2 of the 3 weapons in his car are only permitted to be carried by the Mexican military.

If convicted, FOX news reports he could spend between 6 to 21 years behind bars in Mexico. Tahmooressi is one of at least 3 U.S. soldiers to be jailed in Mexico for possessing guns in the nation.

4. His Mother & Many Congressman Are Petitioning for His Return

Friends, family, supporters, and now at least two elected officials are asking the federal government to help pressure Mexico to release the 25-year-old. Republican Representative Duncan Hunter of California, and Democratic Representative Debbie Wasserman Schultz have both said that they’ve reached out to the State Department.

Above you can hear Andrew’s mother, Jill, tell her side of the story.

5. He Served Two Tours in Afghanistan

Tahmooressi served two tours in Afghanistan, experiences that led him to be diagnosed with post-traumatic stress disorder. Tahmooressi had recently moved from Florida to California to seek treatment for PTSD. He also suffers from anxiety and depression, reports CBS Miami.

He was honorably discharged in 2012. 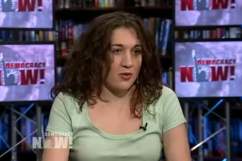 Read More
Breaking News, Marines, Mexico, Military
Andrew Tahmooressi, 25, is a Marine reservist currently imprisoned in Mexico for crossing the border with a number of guns. Here is what you need to know.