Clayton Courtney, 28, has been named as the lone suspect in the murder of Britney Cross, 21, in Janesville, Wisconsin over the weekend, reports The Milawukee Journal Sentinel.

According to Cross’ autopsy, she died from blunt-force trauma to the head. Her body was found at Rock River in Wisconsin on the morning of May 4. Courtney may be facing charges of first-degree reckless homicide, attempted arson, criminal damage and disorderly conduct.

2. He Was Already in Custody When Cross’ Body Was Found

Courtney was already in custody stemming from a separate arrest on May 4, when he’s accused of stabbing a 28-year-old victim. He’s charged with delivering a life-threatening injury in that case. Upon his arrest on May 4, he’s reported to have told police:

He tried to escape police on foot but was quickly apprehended.

3. The Pair Were Said to be Dating

Murder victim Cross was the woman Clayton Courtney did drugs with Sunday night, according to police

NBC 15 reports that Cross’ family last heard from her when she told them she was going to hang out with Courtney on the night of May 4.

4. Another Woman is Missing From the Same Local Area

Cops in Janesville are also looking into the disappearance of Mary Coulthard, 75, who went missing over the weekend in the same area.

5. One of His Likes on Facebook is the White Supremacist Book The Turner Diaries

According to his Facebook page, Courtney is a resident of Madison, Wisconsin. He was a student at Blackhawk Technical College as well as a graduate of Parker High in Janesville. In addition to The Turner Diaries, Courtney also likes, Emmet Till, the 14-year-old African-American boy who was murdered in Mississippi for allegedly flirting with a white woman. 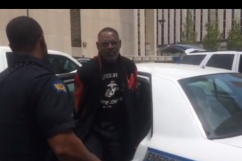