The former No. 1 women’s player in the world, Carolione Wozniacki was ousted in her first match of the French Open, her first tournament since her split with professional golfer Rory McIlroy.

The 13th-seeded Wozniacki lost 7-6 (5), 4-6, 6-2 in her first round of the French Open on Tuesday to 64th-ranked Yanina Wickmayer of Belgium. She is currently ranked 14th in the world.

1. She’s the Former Number 1 Player in the World

At the age of 19, Wozniacki was ranked No. 1 in 2010 after reaching the final of the US Open the previous year. She held this position for 67 weeks and was the first Scandinavian woman to hold the top ranking position and 20th overall. She has been as far as the semifinals three other times at Grand Slam tournaments, but has yet to win one. Watch the video above to see an interview with Wozniacki after the declaration of her number 1 ranking.

2. She Used to Be Engaged to Rory McIlroy

McIlroy and Wozniacki began dating in 2011 after meeting after one of Wozniacki’s matches. Although McIlroy had a girlfriend at the time, he showed interest in Wozniacki as she became increasingly more prominent after her debut in the world of professional tennis in 2005.

Holly Sweeney spoke to the Irish Sunday Mirror just after Rory left her for Wozniacki in 2011. She recalled the foreshadowing when McIlroy told her that he “fancied” Wozniacki while they were watching a tennis match together earlier that year.

Sweeney was heartbroken when McIlroy left her at home and flew to Germany to watch a boxing match where he met the tennis star and proceeded to end his relationship with her.

She told the Irish Sunday Mirror:

“Then he got home, went straight to see the dogs instead of me, dodged me when he came through the door and then sat me down and told me that he met with her in Germany and that he wanted to see how it would go with her.”

After 3 years of dating, Wozniacki was engaged on New Year’s Eve in Australia. The happy couple talked about their plans for the wedding for a long time and then shocked the world when last week, McIlroy announced he and Wozniacki mutually decided to split only days after sending out wedding invitations.

McIlroy made a statement prior to the BMW PGA Championship:

“It is quite a difficult time for Caroline and myself, and the statement really said it all this morning. It was mutual and we both thought it was the best for us, the best for both of us. Time to move on, and I’ve said all that I need to say.”

Wozniacki told the Associated Press of the split:

“What happens in my personal life, I just want to really keep that between my closest people around me. I just have to move on.”

Too add to Wozniacki’s misery, McIlroy won the European Tour’s BMW PGA Championship in England on the Sunday he announced the breakup.

Wozniacki was born on July 11, 1990 in Odense, Denmark from Polish Roman Catholic immigrants, Piotr and Anna Wozniacki. Her parents were both atheltes; Anna played on the Polish women’s national volleyball team, and Piotr played professional football. The Wozniackis moved to Denmark when Piotr was traded to the Danish football club Boldklubben 1909. Patrik Wozniacki, Caroline’s older brother, is also a professional footballer for IF Skjold Birkerød in Denmark. Caroline started playing tennis at the age of 7 and was beating her parents and older brother by the age of 9.

4. She Has Never Won a Grand Slam

Wozniacki (L) congratulates Yanina Wickmayer (R) after losing to her in the first round of the French Open 2014. (Getty)

It’s the first time Wozniacki was beaten in her opener at Roland Garros since 2007 which was the Danish star’s debut at the clay-court Grand Slam tournament. That being said, she has never finished first in a Grand Slam tournament which has been widely speculated by the tennis world. Both her and Serena who was defeated by Garbine Muguruza left Paris and went to game six of the Heat v. Pacers game in the 2014 playoffs- not too bad.

5. Adidas Is Her Main Sponsor

Wozniacki signed an endorsement deal with Adidas in 2009 for the line of tennis apparel designed by Stella McCartney. The blonde tennis star wore her first ‘Adidas by Stella McCartney’ tennis dress at the 2009 US Open. Along with Adidas, she is sponsored by Compeed, Rolex, Danske Invest, Oriflame, Turkish Airlines, Proactiv, Sony Ericsson, Yonex and e-Boks. In 2012, Wozniacki became an endorser of Compeed BlisterPatch and by the end of 2013 she became an endorser for the popular tennis brand, Babolat. Watch the video above to see Wozniacki behind the scenes at the Setlla McCartney/Adidas shoot. 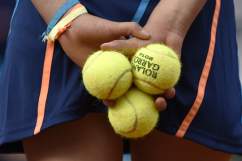 Loading more stories
wpDiscuz
0
0
Would love your thoughts, please comment.x
()
x
| Reply
The former No. 1 women's player in the world, Carolione Wozniacki was ousted in her first match of the French Open, her first tournament since her split with professional golfer Rory McIlroy.