Michael Jace, 48, is an American actor arrested by the Los Angeles police department for allegedly shooting and killing his wife in front of his two children, both younger than 10 years old. TMZ reported the story at around 1 a.m. a.m. early Tuesday morning, but the incident occurred around 8:30 p.m. pacific time.

He is being held on suspicion of homicide and has a $1 million bail.

According to TMZ, Jace was home alone when his wife and children arrived at home on Monday evening. At around 8:30 p.m. police received a call from Jace. When police arrived they found that April Jace was dead of gunshot wounds.

He was arrested and questioned, and at around 3:30 a.m. early Tuesday morning it was reported that Jace was being charged with suspicion of killing his wife.

According to police, Michael Jace called police at around 8:30 p.m., a few minutes after he allegedly shot his wife. Jace reportedly told police on the phone, “I shot my wife,” and stayed on the phone with the dispatcher until the LAPD arrived.

3. His Kids Have Been Taken To the House of a Relative

Michael and April Jace’s two children, both under the age of 10, were reportedly in the home when their mother was killed. The children were reportedly taken to the police station before being taken by Children’s Services and brought to a relative’s home.

Jace has been acting in major television and film production since the early 1990s, with credits including playing a Black Panther in Forrest Gump, Jerome in Boogie Nights. He also had minor rolls in NYPD Blue, Southland, and played Early Wilkinson in the 2000 film The Replacements.

Jace is best known though for playing Detective Julien Lowe in FX’s hit cop show The Shield, which was on from 2002 to 2008. Above you can watch a scene from that show.

5. The Couple Has Been Married For Almost 11 Years

According to April Jace’s Facebook, the couple celebrated their 10th anniversary in June of 2013. 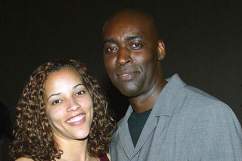 Loading more stories
wpDiscuz
0
0
Would love your thoughts, please comment.x
()
x
| Reply
Michael Jace, 48, is an actor on 'The Shield' arrested for allegedly shooting and killing his wife, April Jace, in Los Angeles.