The cell phone footage above was recovered from the sunken South Korean ferry boat that went down on April 16, causing over 300 people to be killed or go missing. The cell phone belonged to 17-year-old Park Su-hyeon, who was one of hundreds of high school students on a field trip. The video reportedly captures some students’ final moments as they sit trapped somewhere in the middle of the tilting ship.

According to the AP, who published the video on May 1, the students can be heard making nervous jokes about the Titanic as the ship slowly tilts. The mood gets darker culminating with students asking if they are going to die.

Park’s father gave the to the AP in hopes that the world will see the conditions the victims died under as the ship sank. 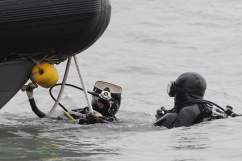