Legendary DJ Casey Kasem has passed away this morning on Father’s Day. He was 82 years old. Kasem has been fighting a long battle of Parkinson’s disease and dementia. This morning, Kasem’s daughter Kerri posted on her Facebook page:

Early this Father’s Day morning, our dad Casey Kasem passed away surrounded by family and friends. Even though we know he is in a better place and no longer suffering, we are heartbroken. Thank you for all your love, support and prayers. The world will miss Casey Kasem, an incredible talent and humanitarian; we will miss our Dad.
With love, Kerri, Mike and Julie.

Kasem was a fixture of the American music industry. Read on for more about the life he lived and the impact he made:

1. Kasem’s Children Decided to Take Their Father Off Life Support

Kasem leaves behind his children, Kerri, Mike, Julie and Liberty, and wife Jean. The family had been embroiled in a fight for medical control of Kasem after Kerri Kasem accused Jean Kasem of cutting off contact with her father and neglecting his medical care. A judge issuing a court-ordered transportation of Kasem to a hospital and Jean Kasem throwing raw meat at Kerri Kasem outside their home in Washington state.

After all the turmoil, Kasem’s children were granted custody of their father, which enraged Jean. On June 11, 2014, a judge ruled that Kasem’s children could make the decision to withhold medication, food, and fluids. TMZ writes:

The judge in Casey’s conservatorship case just reversed a ruling which required doctors to keep him alive with nourishment and meds.

Kasem’s children told TMZ that their dad had told them:

If the extension of my life would result in mere biological existence, devoid of cognitive function, with no reasonable hope for normal functioning, then I do not desire any form of life-sustaining procedures, including nutrition and hydration.

Wife Jean reportedly stormed out of the courtroom yelling that Kasem’s children will have their father’s blood on their hands. Have a look at her reaction to the unfortunate news in the below video.

Kasem, Don Bustany, Tom Rounds and Ron Jacobs created American Top 40, which Kasem hosted for a combined 34 years. The show, featured in the video above, aired its first episode on July 3, 1970 and has broadcasted more than 2,000 episodes since its inaugural episode. The show now runs for four hours and 10 minutes, commercials included.

At one point, the show was broadcast on more than 1,000 radio stations across the country. It was on American Top 40 that Kasem coined his signature phrase, “Keep your feet on the ground, and keep reaching for the stars.”

3. He Was the Voice of Shaggy in the Scooby-Doo Cartoon Series

Kasem was the voice of Shaggy in the Scooby-Doo cartoon series for a combined 36 years, which you can listen to in the video above. Kasem lent his voice to other cartoons as well, including Robin in the Batman cartoon series, Josie and the Pussycats, and appeared in three early episodes of Sesame Street in 1970.

Kasem also appeared on Saved By The Bell to judge a dancing contest. Have a look at the clip below:

4. He Started Broadcasting During the Korean War

When Kasem was 20-years-old, he was drafted into the U.S. Army and worked as a radio announcer and DJ when stationed in Korea. It was in Korea Kasem began developing some of his signature formats, like mentioning facts about artists and songs before playing them on air.

5. He Was Inducted Into the National Radio Hall of Fame

Kasem was inducted to the National Radio Hall of Fame in 1992, making him the youngest inductee in history. He received a star on the Hollywood Walk of Fame in 1981 on April 27, his 49th birthday. JC Chasez presented Kasem with the award. 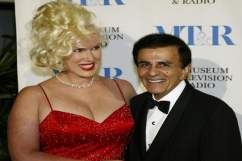 Read More
5 Fast Facts, Celebrity, Death, Radio
wpDiscuz
0
0
Would love your thoughts, please comment.x
()
x
| Reply
DJ Casey Kasem has sadly lost his battle with dementia and Parkinson's disease. Read on for the facts on Kasem's passing in addition to the amazing life he had.