Cops have named 22-year-old Cedric McGinnis as the suspect in the slayings of three women in Fort Worth, Texas. The women were all found dead Tuesday inside a home in the 500-block of West Felix Street in Fort Worth, and cops said McGinnis confessed to being involved Wednesday.

1. He Was the Ex-Boyfriend of 1 of the Victims

#Breaking from @fortworthpd announce arrest in yesterday's deadly shooting/stabbing. Ex-boyfriend of one of the victims, Cedric McGinnis.

Cops told local media outlets that McGinnis is the ex-boyfriend of one of the victims. According to the Fort Worth Star-Telegram, McGinnis dated April Serrano at one time.

The Fort Worth Star-Telegram reports McGinnis posted a message to his Facebook page on Tuesday night expressing his grief about Serrano’s death. The message read:

R.I.P April Marie Serrano mane. Its always the innocent ones that get (expletive) over. Gone but never forgotten. RNS #lovetothefamily #lovetoher

Watch the video below to see a television report about the crime and to hear from a family member of the victims:

The Dallas Morning News reports two of the women were found in the living room of the home with gunshot wounds to the head. A third woman was found in the master bedroom with multiple stab wounds.

You can read the press release from the Fort Worth Police Department here:

#westfelixmurders McGinnis eventually admitted involvement per @fortworthpd & is now being held on $1,250,000 bond at Fort Worth @NBCDFW

McGinnis is charged with capital murder and being held on $1,250,000 bond.

4. He Led Cops to the Crime Scene

According to the press release issued by Fort Worth Police, McGinnis lead officers to the scene voluntarily. The release reads:

McGinnis voluntarily agreed to speak with detectives. McGinnis eventually admitted his involvement in the murder of the 3 victims and advised detectives where evidence from the crime could be found.

5. He’s Been Arrested Before

According to the Fort Worth Star-Telegram, Tarrant County court records show McGinnis was convicted of possession of marijuana under two grams in 2011. Last year he was convicted for evading arrest. He was charged with robbery in 2011, but later no-billed by a Tarrant County grand jury. 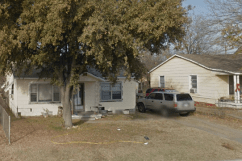 Loading more stories
wpDiscuz
0
0
Would love your thoughts, please comment.x
()
x
| Reply
Cops have named 22-year-old Cedric McGinnis as the suspect in the deaths of three women in Fort Worth, Texas.