Cops say Jerad Miller and his wife Amanda are the anti-government radicals who ambushed two Las Vegas police officers inside a pizza place before shooting a third victim dead inside a nearby Walmart.

Miller, shown in the video above dressed as Joker and announcing he’s running for president, has a long history of disturbing social media content, including an ominous message he posted just a day before the shootings.

Miller’s Facebook page is littered with ominous posts alluding to death. His last post, which went up a day before the shootings, read: “The dawn of a new day. May all of our coming sacrifices be worth it.”

In a message dated June 2, he ranted about the need to fight tyranny, which he said “can only be accomplished with bloodshed.”

We can hope for peace. We must, however, prepare for war. We face an enemy that is not only well funded, but who believe they fight for freedom and justice. Those of us who know the truth and dare speak it, know that the enemy we face are indeed our brothers. Even though they share the same masters as we all do. They fail to recognize the chains that bind them. To stop this oppression, I fear, can only be accomplished with bloodshed. May the best men of our beloved nation stand and fight tyranny, without fear and without regret. May we stand proud as free men instead of kneeling as slaves. May we offer our children a free and just world with our blood, sweat and tears as payment. Let our wives and lovers take vengeance upon our enemies in our absence. We cannot fail in this endeavor of Liberty, if we do we risk leaving our orphaned children to the will of tyrants. We, cannot with good conscience leave this fight to our children, because the longer we wait, our enemies become better equipped and recruit more mercenaries of death, willing to do a tyrants bidding without question. I know you are fearful, as am I. We certainly stand before a great and powerful enemy. I, however would rather die fighting for freedom, than live on my knees as a slave. Let it be known to our children’s children that free men stood fast before a tyrants wrath and were found victorious because we stood together. That we all cast aside our petty differences and united under the banner of Liberty and Truth. May future generations look back upon this time in history with awe and gratitude, for our courage to face tyranny, so that they could live happy and free.

2. He & His Wife Often Talked About Killing Cops & Had Plotted to Execute Public Officials

Neighbors described the Millers as racist, anti-government radicals who talked often about killing cops, and cops said Monday that the two may have been plotting to take over a courthouse and execute public officials.

Krista Koch, who lives in the Bruce Street apartment complex where the suspects lived, told the Las Vegas Review-Journal that the suspects were “militant” and had talked about killing police officers after going “underground” until it was the right time to kill.

The Millers decided to act on Sunday, when they gunned down officers Alyn Beck and Igor Soldo (pictured below) while the officers were having lunch at Cici’s. Both officers were married with young children.

Fielder, who called the Millers her “best friends,” told the paper she didn’t know the two were “that crazy.” It wasn’t clear what, if anything, Fielder knew about the content of the documents.

Sources also told the paper they found swastikas on some of the Millers’ belongings when searching the couple’s apartment and were investigating their ties to white supremacists.

The likes on Miller’s Facebook page include the Three Percenter Nation and Operation American Spring.

3. He Recorded a Tearful Video Tribute to His Wife Before a 2013 Prison Sentence

A shirtless, tearful Miller posted the video above with a message to Amanda before serving a jail sentence in 2013. In the message, Miller says “I’m going to miss your smile and your laugh, and the way you can always bring a smile to my face eventually, no matter how crabby of a mood I’m in because of the New World Order and sh-t.”

Miller had a long criminal history dating back to 2007 in Indiana, where the couple used to live, according to the Lafaytette Journal & Courier.

The arrests range from battery to possession of a controlled substance.

In the video below, he recounts what he said was a confrontation with cops when he was naked. The video is titled “Police confiscate and threatened to kill me.” 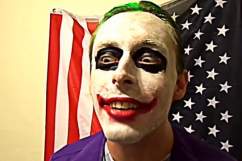 Jerad Miller: The YouTube Videos You Need to See

4. He Was at Cliven Bundy’s Ranch During Bundy’s Standoff With the Feds

Miller and his wife showed up at Cliven Bundy’s Nevada ranch in April to show support for Bundy, a cattle rancher who was in a standoff with the feds over his refusal to pay grazing fees.

The video above shows Miller expressing his support for Bundy during the standoff. Skip to the 43-second mark to see Miller’s interview.

“I feel sorry for any federal agents that want to come in here and try to push us around or anything like that,” he said. “I really don’t want any violence toward them, but if they’re going to come bring violence to us, well, if that’s the language they want to speak, we’ll learn it.”

Bundy became a divisive and eventually highly ridiculed figure during and after the standoff, at first gaining sympathy from Tea Party groups but eventually drawing national shame for just about everyone for saying black people — whom he called “the Negro” — might have been better off under slavery.

The Southern Poverty Law Center, which has a detailed breakdown of Miller’s Facebook activity, points out that Miller posed for the picture below with Richard Mack, a former Arizona sheriff who leads the Constitutional Sheriffs and Peace Officers Association, which took part in the pro-Bundy demonstrations.

Reached by the SPLC Monday, Mack said he was afraid when he heard news of the Las Vegas shooting that Miller had been one of the people who had joined his group at the Bundy ranch.

“I was afraid that he might have been at the Bundy ranch,” he told the organization. “As soon as I heard about it, I was afraid of that.”

Clivan Bundy’s son, Ammon Bundy, told the Associated Press Monday that the Millers, who he described as “radical,” were asked to leave the Bundy ranch after a few days because of conduct that Bundy said wasn’t in line with the mission of the protests.

5. He Draped an Officer’s Body in a Gadsden Flag After His Wife Shot the Officer

The Review-Journal reported Jerad Miller draped one of the officers’ bodies in something that featured the Gadsden flag, the yellow banner featuring a snake and the words “Don’t Tread on Me” that served as a symbol of the American Revolution. 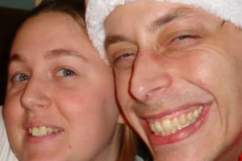 Jerad & Amanda Miller: The Pictures You Need to See