Michael Bradley, the son of the former U.S. national team coach, Bob Bradley, will be the starting center midfielder in the world cup this year. Watch the video above to hear Bradley’s story.

Here’s what you need to know about the talented player:

Bob Bradley served as the head coach for the USMNT from 2007-2011, but after five years he was let go and replaced with current head coach, Jurgen Klinsmann. Klinsmann was supposed to take the coaching job in 2007, but when he didn’t Bradley took over the team as a second choice and went on to build up the team. Before this, he coached his son on the MetroStars where Michael spent his first two years in professional soccer.

After leaving the U.S. national team, he heard Egypt was looking for a head coach and decided to take the job over there coaching for Egyptian national team. Bradley has had a lot of influence on his son’s career, setting him up to be the great soccer player he has become the player that he is today. Watch the video above to hear Michael Bradley’s interview about growing up around the MLS.

Bradley currently coaches for Stabæk Fotball in Tippeligaen, the top tier division of football in Norway.

2. He Was the Youngest MLS Player Ever Sold

Bradley signed a Project-40 contract with MLS, at the age of sixteen to begin his professional career. He was selected thirty-sixth overall by the MetroStars in the 2004 MLS SuperDraft by his father, however he saw very little playing time as a rookie due to a foot injury. His second year he worked his way up to a starting spot in 30 of the 32 matches in the MetroStars’ season. His father was fired soon after, but Michael continued to excel, heading in his first goal a few weeks later.

By January 2006, Bradley was transferred to Heerenveen, a Dutch football club, making him the youngest MLS player to ever be sold. The contract was for $250,000 and a portion of any sell-on fee. Bradley did extremely well right off the start for the club, aiding his team in earning a spot in the UEFA Cup, and then going on to score 20 goals in the 2007-2008 season.

Just two years after his transfer to the Heerenveen, he had scored the most goals in a single season by any American soccer player playing in the first division of the UEFA, breaking Brian McBride’s record of 13 goals by 5.

3. He Transferred to Toronto FC for $10 Million

This past January, AS Roma declared the sale of Bradley to MLS’s Toronto FC for $10 million (€8 million). The contract included a partnership agreement to host two friendly matches in Toronto within 6 years along with the participation in a player development program hosted in AS Roma’s training facilities for Toronto FC’s players.

His salary at Toronto FC will be a $6.5 million dollars, 5 times more than he was making on Roma FC.

4. He Learned to Play in Chicago

moved to chicago- started with chicago soccers- winters are long and hard there-school would end at 4 and id get in any game i could i was playing everyday that’s all i wanted to do.

Bradley was born in Princeton, New Jersey, on July 31, 1987 where his father was coaching the Princeton University soccer team at the time.

His family moved to Palatine, Illinois, shortly after when his father to the coaching position for the Chicago Fire (MLS). Bradley ended up playing for the Sockers FC in a youth league throughout his teenage years where he was part of the 2002 National Championship winning team. He went on to the United States U-17 Men’s National Team Residency Program in Bradenton, Florida where he stayed for 2 years (2002-2004) before joining the world of professional soccer at the age of 16.

Watch the video above of an interview with Bradley and teammate, Brad Guzan about growing up in Chicago.

Bradley international career began in 2006 when he attended training camp for the 2006 World Cup national team. Bradley was on the roster, but not a member or alternate for the team in the first three practice matches, but got the opportunity to play as a substitute in matches against Venezuela and Latvia.

His father was hired that year as Michael transitioned into a core player for the U.S., making his first start for the U.S. national team in a match against Guatemala. Bradley earned his first international start on March 28, 2007, during a friendly against Guatemala. He led the U.S. to victory in the 2007 CONCACAF Cup. Watch the SportsCenter commercial above featuring Bradley, proving himself to be one of the most established player on the national team.

Bradley started in every match in the the 2007 FIFA U-20 World Cup, scoring the winning goal in the 16th round against Uruguay.

In the 2010 World Cup qualifier against Mexico he scored two goals to give the U.S. victory. By
2012, Bradley was labeled the starting center midfielder under the current U.S. national team coach, Jurgen Klinsmann. 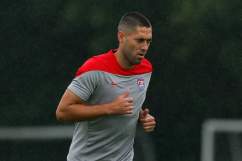