Alvin Likness was in business with the man who is accused of killing him, Douglas Garland, reports The National Post. Police in Calgary have charged Douglas Garland with the murders of Alvin and Kathryn Likness, as well as their 5-year-old grandson Nathan O’Brien. No bodies have been recovered in the case but police now believe they have enough evidence to suggest the three, who have been missing since June 30, are now dead. Police chief Rick Hanson has not described previous business dealings between Likness and Garland as a motive but has called it a “leading theory” in the case.

Here’s what you need to know about Alvin Likness:

1. His Grandson Was Sleeping Over at His House When He Went Missing

The Liknes’ grandson, Nathan O’Brien, had been staying over with his grandparents on the night of June 29. When Nathan’s mother, Jennifer, never heard from either Liknes or his wife on June 30, she raised the alarm. The young boy had been staying with his grandparents just prior to their retirement move to Mexico. One of Liknes’ business associates, Bruce Carson, told The National Post, that Liknes was a golf enthusiast who was ready to move to Mexico for six months and then spend six months living in Edmonton.

2. Liknes Had Cleared Out His Office the Day Before He Disappeared

One of Liknes’ companies, Winter Petroleum, was located in this strip mall in Calgary. (Google Street View)

The National Post report into Liknes business dealings states that on the week of his disappearance, Liknes had cleared out his office in a Calgary strip mall. The property manager told the newspaper that Likness was a nice man who always paid his rent on time.

3. He Had a Business Venture With Douglas Garland

The Calgary Herald reports that Likness and Garland were in business together some years back. The last company that Douglas Garland was affiliated with was a chemical company called P2 Solutions. In 1992, Garland was arrested for making meth on his parents land, he managed to abscond but was rearrested in 1999. A year later, Garland was sentenced to 39 months in prison. Garland is also linked to the Liknes family as his sister is in a relationship with Alvin’s son, Al.

4. He & His Wife Have Both Declared Bankruptcy

According to the National Post, in 1994 Alvin Likness declared bankruptcy, in 2012, Kathryn Liknes did similar. She previously worked as a real estate agent but since 2012, according to her Facebook page, she has worked in online marketing.

5. Likness Sat on the Boards of Numerous Companies

Alvin Liknes' son Josh says to crowd at candlelight vigil he's excited to see the three again and knows he will. #yyc pic.twitter.com/fLjXwJtmjK

In addition to his role with Winter Petroleum, Liknes also worked with a Nevada-based company called Blue Sky Oil and Gas Corp. The company produced natural gas. That company later merged with Whitemark Homes, a Florida-based company that diversified following the housing crash in 2008. His colleague, Bruce Carson, doesn’t believe that Liknes’ business deals would have anything to do with his death. He told The National Post “He’s just a great guy to work with, whether things worked or didn’t work, he was giving his best efforts. I can’t picture anybody being angry enough to do what they’ve done.” 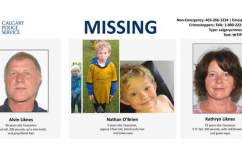